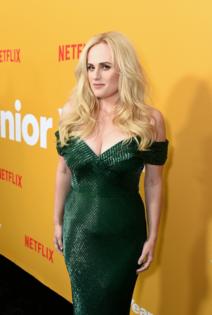 Rebel Wilson just recounted what she called an “awful and disgusting” incident with a co-star who couldn’t keep his pants on.

It happened a few years back, the “Senior Year” star told People this week, before the #MeToo movement gained steam amid the 2017 Harvey Weinstein scandal. She says a male co-star, whom she hasn’t named, sexually harassed her.

“He called me into a room and pulled down his pants,” then asked her to perform a lewd act, the 42-year-old actor alleged. All in front of his friends.

Wilson, who is a trained lawyer, said she documented everything that happened and preserved things in writing.

“It was awful and disgusting,” she says. “And all the behavior afterwards ... where they kind of tried to destroy me and my career.”

Wilson’s currently starring in Netflix’s comedy about a high school senior who has an accident, goes into a coma and wakes up 20 years later to resume her senior year. Add to that movies like “Jojo Rabbit,” “Isn’t It Romantic” and the entire “Pitch Perfect” franchise and you have a packed resume.

But that doesn’t mean the incident had no effect — she said she still questions why she stayed in that situation. Wilson told People that she made sure people in “industry circles” knew what happened, even as she chose to finish the film. She also complained to the agency and the studio.

“I found out I was like the fourth person to complain about the guy,” she said. “Such gross behavior, but a lot of women have had it way worse.”

Evidence that she might handle things differently now? In 2016, she went public via social media after believing she’d been drugged at a “trendy club” in L.A.

“Hey guys, but especially to all the girls out there, please be super careful about what you drink when out at clubs and bars at night,” she said at the time in a series of tweets. “I had one drink last night at a trendy club which I believe may have been spiked with something. I felt super [tired] and disoriented.

“I got home safely but woke up this morning feeling like I’d been hit by a truck,” she wrote, saying she never thought something like that would happen to her. She also warned others to “get to safety” if they started feeling anything strange happening in that sort of situation.