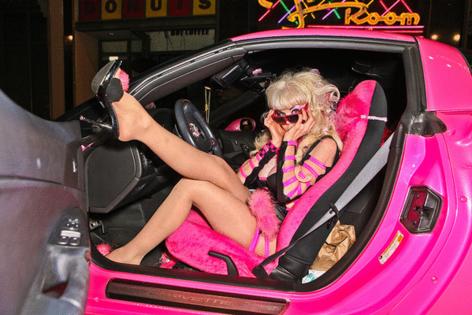 Los Angeles proto-influencer Angelyne simply does not like Peacock’s depiction of her in its new miniseries.

In an interview with “Inside Edition” released Thursday, the self-promoting billboard pinup renounced “Angelyne” after catching “a little glimpse” of actor Emmy Rossum’s titular performance. The show premiered this week on NBC’s streaming platform.

“I had a little glimpse of it, and I refuse to watch it,” Angelyne told “Inside Edition.” “It doesn’t do me justice. Would you be flattered if someone played you and misrepresented you?”

Despite the real Angelyne’s distaste for her portrayal, Rossum fondly recalled meeting the La La Land icon in person.

On Thursday’s episode of “Late Night With Seth Meyers,” Rossum told Meyers she was delighted to meet her muse after becoming “deeply enamored of her and her feminine powers,” even though Angelyne showed up an hour late to their rendezvous — delayed by a swarm of fans eager to purchase merchandise and $50 selfies with the local legend.

“She finally sat down — she laid a napkin on a chair and she delicately sat down and posed in her way — and then she said, ‘So why do you have such a hard-on to play me?’” Rossum recalled.

“And I was like, ‘That’s why.’ ‘Cause she’s a real badass. She’s a feminist in the most unexpected way, and she’s totally unapologetic.”

In order to become the voluptuous, Barbie doll-esque Angelyne, Rossum said she spent about seven hours in the makeup chair getting painted and sculpted “like you’re the Sistine Chapel.” The “Shameless” alum described the transformation as “unsettling” and “terrifying” — but it gave her the “freedom” to be bold onscreen.

“She’s like a unicorn in Los Angeles,” Rossum said. In the 1980s, Angelyne was ubiquitous in L.A. where she erected hundreds of billboards advertising her name and likeness and drove around in a bubblegum-pink cruiser.

“She was the first person who’s gonna raise her hand and say, ‘I am famous and I am an enigma. I am a mystery’ — and to be celebrated for who she is and not something that she does.”