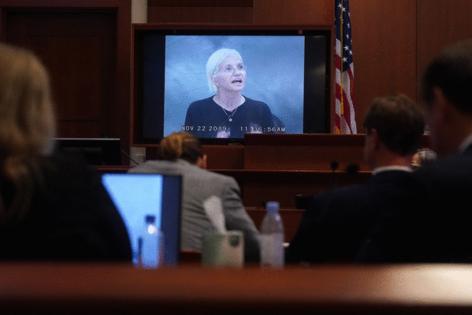 The “Somebody Like You” actor, who was friends with Depp for about a decade in the 1990s and had a sexual relationship with him for a few months, appeared on behalf of Heard’s legal team in a video deposition recorded in November 2019.

In the video, she described Depp as a man who was frequently drunk or high or both, who was also jealous and controlling in general. The two actors both appeared in the movie “Fear and Loathing in Las Vegas,” which filmed in 1997 and was released the next year.

She alleged she had seen Depp in an “out-of-control” situation in a Las Vegas hotel room during a fight with his friends or his assistant (she couldn’t recall exactly who it was). During the spat, he allegedly threw a wine bottle across the room, she said, in the direction of her and some other people. The bottle didn’t hit her, and she couldn’t remember if it was full or empty.

The two actors’ relationship turned sexual in the last three to six months of their long friendship, Barkin said. At the time, she had moved to Los Angeles, about 10 minutes from where Depp was living. Things ended when he broke it off, she said, and they didn’t speak again after that.

“I just know he was always drinking or smoking a joint,” said Barkin, who was unable to specify how often she saw him altered. She said he also used cocaine in her presence and called her at times to tell her he was “trippin’” on hallucinogenic drugs.

“He’s just a jealous man, controlling,” she said. “‘Where are you going? Who are you going with? What did you do last night?’”

As an example, she said, “I had a scratch on my back once that got him very, very angry because he insisted it came from me having sex with a person who wasn’t him.”

Barkin said it was “very common” for Depp to make remarks she considered jealous or controlling.

Depp and Heard are battling it out in a $50 million defamation case he filed against her after she wrote a Washington Post op-ed in 2018 framing herself as “a public figure representing domestic abuse.”

Before they divorced in 2016, Heard had obtained a temporary restraining order against Depp after alleging he had committed domestic violence. The “Pirates of the Caribbean” star says he never hit his ex, and his legal team has been painting her as the abusive one.

Heard has countersued her ex-husband for $100 million, alleging his attorney made defamatory statements about her on Depp’s behalf. The cases are being tried simultaneously.

The Depp-Heard trial will be dark Friday and then return Monday morning. Closing arguments are scheduled to wrap up May 27.