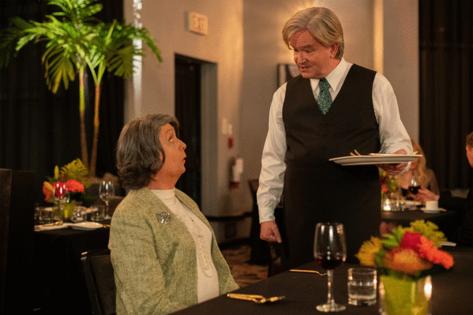 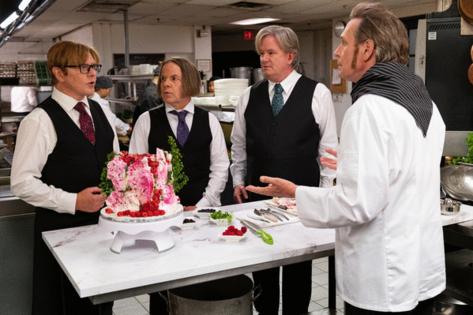 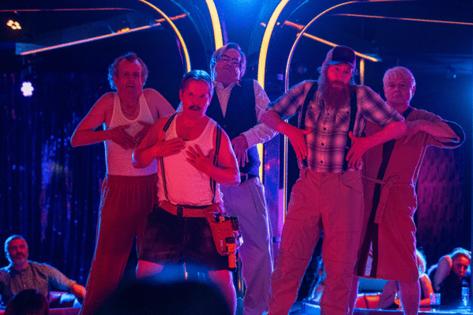 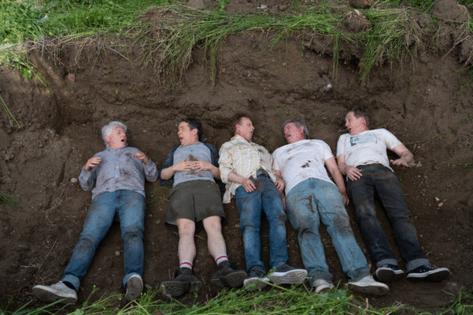 The TV landscape tends to feel pretty dismal when “Saturday Night Live” is the only sketch comedy game in town. And often that’s the case. Over its four-plus decade run, it certainly has outlasted so many others — from “SCTV” to “In Living Color” to “MADtv” to “Key & Peele” and more — but that doesn’t make it the funniest or most creative. Just the longest standing. Which brings us to the return of “The Kids in the Hall” on Amazon, and it’s as if the clouds of gloom have parted to make way once again for their particularly sunny sense of the absurd. Even with “SNL” head honcho Lorne Michaels as executive producer, this '90s-era staple somehow always felt smarter, more playful, humanistic and better observed than “SNL.” And yes, funnier.

Back with new episodes after more than 30 years, this version of “The Kids in the Hall” stands out for another reason. Bruce McCulloch, Mark McKinney, Kevin McDonald and Scott Thompson are in their 60s. Dave Foley is almost there at 59. Sketch comedy tends to be a young person’s game. Just the wig-ery of it all. And yet here are five guys well past their supposed prime just ripping into the form as if they never left.

And in a way they haven’t. They broke up as a group sometime after the release of their 1996 film “Brain Candy” — the intense pace of their original show meant the work was no longer fun, and by that point they didn’t particularly like each other either — but sometime in the 2000s, they reconnected and started doing live shows again and their instincts as writers and chemistry as performers remains as wonderfully ridiculous as ever.

Amazon has a two-part documentary about the group as well, called “The Kids in the Hall: Comedy Punks,” which traces their Toronto performing origins through the show’s heyday to the collapse of their collaboration, and it pairs nicely with the show’s reboot. Four of the group’s members grew up in the suburbs. McKinney, though, was far more urbane as the son of a diplomat, which somehow, the documentary notes, made him the de facto group representative in the eyes of Lorne Michaels, which is a revealing detail about how Michaels operates and the pecking order he seems to require from the talent he oversees.

The original “Kids in the Hall” ran for five seasons on HBO before ending in 1995. The new episodes on Amazon are presented as Season 6 — picking up where they left off, more or less — and if the first episode feels overly self-conscious about their age and long absence from TV, you can understand some of their nervousness about stepping back onto a television terrain that looks much different from the one they’d left. Maybe that’s why they didn’t film in front of a studio audience this time. Maybe that’s why Foley and McDonald get fully naked — the camera lingering for long, long time — to shake off the cobwebs and say: Here we are, not even pretending this doesn’t feel weird. The bit didn’t make me laugh so much as admire the “oh, screw it” energy behind it, far more than the addition of interstitials called “Friends of Kids in the Hall,” featuring well-known names such as Catherine O’Hara and Pete Davidson, who don’t interact with anyone but simply look into the camera and riff for a few moments. It feels sort of pointless and panicky, as if “Kids in the Hall’' needed to connect themselves to “better known” comic names of today. They don’t. They really don’t.

There are a handful of returning characters from the '90s: The fussy, giggly office workers known as the Cathys; Thompson’s inimitable out-and-proud Buddy Cole; Mark McKinney’s “I’m crushing your head!” loner. There are also sketches that make you wonder if these men feel out-of-step with (or simply mystified by) concepts such as microaggressions or workplace toxicity. A man wears clown shoes to the office and is accused of appropriation by the clown community. A Zoom meeting devolves into a group sex scene — skewering the Jeffrey Toobins of the world, aka people who masturbate during work video calls — and I get the ideas behind these sketches, I just don’t think they actually land. Or have anything to say. That Zoom meeting is pretty wild though, I’ll give it that.

But hits and misses are part of the deal with sketch comedy, and the misses aren’t really all that bad anyway. I like a lot of the new material, and it’s actually pretty dark. Very funny. Very dark.

McCulloch plays a comic book character called Super Drunk, who wears a necktie tied around his head, party-style. “Ah, he’s slurring his words,” someone says, “his powers are kicking in!” A bust of Shakespeare comes to life but, because he has no limbs, blood starts shooting from his empty arm sockets and it’s like the Black Knight bit from “Monty Python and the Holy Grail.” These are silly ideas taken entirely seriously and there’s so much charm in that. “The Kids in the Hall” never really played with topical humor, which means you won’t find them doing something as repellent as, oh I dunno, reenacting a court case involving two celebrities and domestic violence for laughs. “SNL” does that.

“Kids in the Hall” is more interested in the comedy of the unexpected, tinkering around with the extremities of human foibles and eccentricities. A pregnant couple — Thompson as the father and McDonald as the mother — have the most alarming consultation ever with their obstetrician (Foley, assured and oblivious) about the doctor’s drop average. That would be the average amount of times “there is dropage” of a newborn during delivery. McDonald stares in disbelief: “You drop ... babies?” Oh, yes, their doctor informs them: “I was on ‘The Tonight Show’ once and Jimmy Fallon threw 10 greased chihuahuas at me and I was able to catch seven of them!” Then he lights a cigarette. “Oh, do you mind? Besides, if I don’t smoke I get the shakes and then my drop average really plummets.” So you’ll be smoking during the delivery? “Oh yeah, like a chimney!” McDonald’s face throughout the sketch is a thing of beauty; he’s always so funny and real when he’s playing women, and maybe it’s because he tends to dial back on some of his more over-the-top comedy instincts.

Thompson’s Buddy Cole strolls through Toronto, reminiscing about gay bars that have come and gone, when he stumbles upon the last glory hole in the city — and friends, that glory hole is sentient, and it asks to be declared a national monument. Cut to: A dedication ceremony with Queen Elizabeth, who reads from a speech. “We gather here today on this solemn occasion to salute the brave men and men who took the ultimate leap of faith by sticking their members through a strange hole with the hope that someone with good intentions was on the other side.”