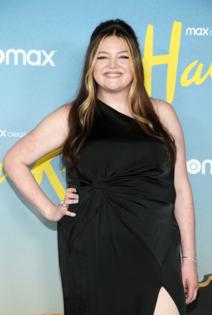 LOS ANGELES — Megan Stalter was glancing at an antique spinning wheel in the guest room of her mother's house in Ohio last June when, suddenly, inspiration struck. It was Pride month, when corporations issue bland, often unconvincing statements of support for the LGBTQ community.

A thought occurred to her: Wouldn't it be funny if a store with a down-home aesthetic (think Cracker Barrel) made a Pride commercial?

Stalter had a few minutes to kill before her mom picked her up for a shopping trip, so in a single take she recorded a video that quickly went viral. In a pair of braids and her signature winged eyeliner, the comedian posed stiffly in front of the spinning wheel and launched into a clumsy sales pitch for a fictional establishment called Cecily's Butter Shop.

"Hi, Gay! Happy Pride month! This month we are sashaying away with deals," she said through a forced grin, plugging the discounts available to anyone "if you can prove that you're queer." "We've been making butter since 1945. And we've been accepting all people since" — she paused — "the last four months."

Bossy, bumbling, prone to malapropisms and anxious tics, the butter store employee displayed the hallmarks of what has fast become a comedic archetype: the Megan Stalter Character.

"I love to play people that are a little bit in their own world, yet there's something endearing about them," said the actor, 31, during a recent video chat from her home in Los Angeles. "Someone whose house is burning down but they have a smile on their face. And they're like, 'Everything is fine!' when it's not."

Stalter's profile ascended rapidly during the early days of the pandemic, when she performed nightly on Instagram Live from her Brooklyn, New York, apartment and shared a staggering number of "front-facing comedy" videos, or solo character sketches recorded on a smartphone. In addition to "Hi Gay!," probably her biggest hit to date, there's "woman who doesn't realize she joined a cult," "woman who accidentally says 'you too' after someone tells her to have a good flight," "influencer mommy who keeps getting interrupted" and many others. She epitomized a new generation of DIY comedy stars, like Cole Escola and Ziwe Fumudoh, who distributed their own content on social media when traditional venues were closed.

Increasingly, though, Stalter has brought her lovably unhinged alter egos to projects filmed outside her living quarters.

This month she reprises her breakout role as Kayla, a clueless Hollywood assistant brimming with self-assurance yet utterly lacking self-awareness, in the HBO Max comedy "Hacks," and recently performed during the Netflix Is A Joke comedy festival. She'll also appear in Peacock's reboot of "Queer as Folk," premiering next month, and will soon film "Cora Bora," an indie comedy about a millennial in an open relationship.

"Every year since me deciding to, like, really go after what I wanted to do in life has been better than the next," Stalter said. "My life already is better than I ever could expect. My dreams are already coming true. And I feel so lucky. Because how often does it get to happen?"