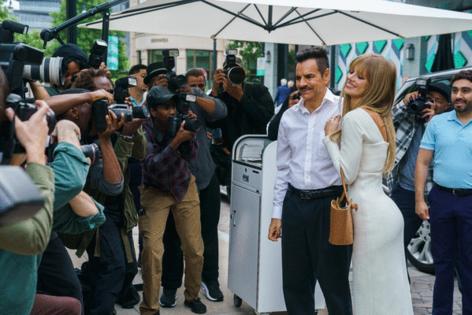 "The Valet" starts with a "fake lovers" premise routine in rom-coms, but this Hulu original film doesn't park in the wide-open spot. The funny, grounded remake of a 2006 French comedy arrives in a Pinto and leaves in, if not a Porsche, at least a Prius.

Unambitious but hardworking valet Antonio (Eugenio Derbez) finds himself caught in the middle of an affair between superstar actress Olivia (Samara Weaving) and married billionaire Vincent (Max Greenfield) when paparazzi happen to capture the three in the same photo. To keep the affair secret, Vincent pays Antonio to pretend to be the one in a relationship with Olivia. Familiar, right? Sure, there's convenience to the gag and its resolution. But "The Valet" has more going for it than that farce setup, thanks largely to its sparkling leads.

Bob Fisher and Rob Greenberg's screenplay updates Francis Veber's French film "La Doublure" with texture and warmth. (Veber has made such comedy classics as "Les Comperes" and "Le Diner de Cons," among others receiving American remakes.) The earned sweetness is particularly evident in its fond familial eye and taste for flavors of L.A. only longtime Angelenos would recognize. "The Valet" embraces the ongoing cultural collisions at the heart of the city.

Richard Wong's deft direction is crisp, funny (he knows just how to time an insert of Antonio's cousin punching a mannequin) and, most importantly, trusts its performers to deliver. Of course, starting an ensemble with Derbez and Weaving helps.

Fresh off his impressive dramatic turn in "CODA," Mexican comic star Derbez takes a role that could have been flat — the nice guy/sad sack/passive protagonist to whom things happen rather than the driver of the action — and makes it sympathetic. We buy his familial connections and feel his wilting resignation when his supportive friend tries — and fails — to list the positive qualities that would explain a gorgeous superstar falling for him. And when Derbez and Weaving pair in scenes, their expert timing synchronizes.

Weaving delivers in every role. After elevating genre fare such as "The Babysitter" and "Ready or Not" with pinging intellect, she shows off superb comic chops with expertly deployed eye rolls and stony glares of disapproval. In a limo scene, her facial slide into horror is a scream. She makes the most of clueless, spoiled-star lines such as "Can you tell him to stop sweating?" And because she's such a skilled actor, we believe the layers underneath — especially Olivia's loneliness as she witnesses the everyday intimacy of Antonio's family life.

In her final role, actress and politician Carmen Salinas is adorable as Antonio's mother, Cecilia. Having reached the age of saying and doing whatever she likes, Cecilia is no fading flower ("I share a bathroom with her," declares Antonio, "and she's not shy!") and doesn't hesitate to savor her new romance. It's lovely work. Amaury Nolasco gets mileage out of the gobsmacking discovery that his unassuming brother-in-law is apparently a stud with godlike sexual powers.

It's the family dynamic, though, that anchors the movie's world and makes a truly touching sequence near the end land hard. The closest comp may be Joel Schumacher's "Cousins," a warmer and livelier remake of the French "Cousin, Cousine," another fake-lovers rom-com populated with folks you enjoy having around. Like that film, thanks to the synthesis of adaptation, direction and ensemble — especially its leads — "The Valet" rewardingly finds its own way.

How to watch: On Hulu Friday