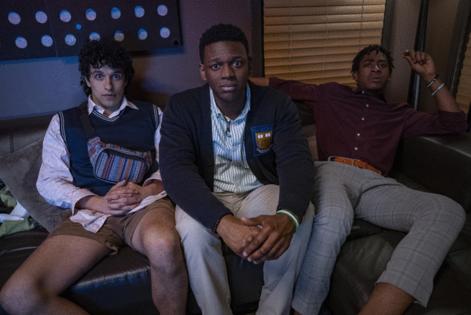 So much about “Emergency” impresses.

From the revelation of what it truly is — as opposed to what it briefly is pretending to be — to the story choices made by its writer and director, the film is impactful all the way through its final shot.

Arriving in select theaters this weekend before being available a week later on Amazon’s Prime Video streaming platform, the smart comedy-drama satire is an extension of a short film of the same name made by writer KD Davila and director Carey Williams.

Although ”Emergency” initially wants us to believe it’s about a pair of young Black men out for a night of partying before the spring break of their senior year at college, the film is far more concerned with giving viewers a window into what it can be like to be a young person of color in the United States.

And while no one movie truly could give us that full picture, this is a mighty impressive swing at it.

We are introduced to best friends Sean (RJ Cyler) and Kunle (Donald Elise Watkins) on the campus of what appears to be a predominantly white college before they attend a class called Blasphemy and Taboo. In the lecture hall, a white professor (Nadine Lewington) comfortably discusses the N-word, projecting it in large type in front of the students and using it liberally. After acknowledging it is making several students uncomfortable, she zeroes in on the two Black people in the room.

“I don’t want to put you two on the spot,” she says, “but you must have something to say.”

Um, they don’t — at least as far as we see — and carry their stunned expressions outside with them when the class is done.

A white classmate, Gillian Rabin’s Bianca — in whom Kunle has a romantic interest — approaches them after class, letting them know she’s on the student senate, in case they “want to, like, start a movement or something.”

As will so many things in “Emergency,” this interaction rings true.