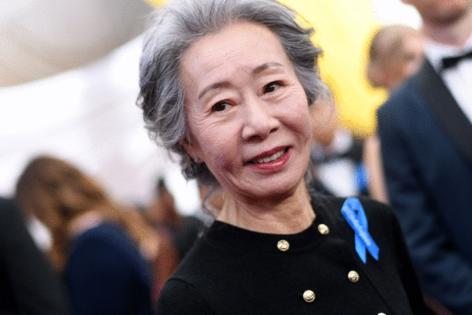 Fresh off her Oscar win for "Minari," Youn Yuh-jung stars in "Pachinko," Apple TV+'s adaptation of Min Jin Lee's 2017 novel. Youn plays the 1980s version of Sunja, whom the story introduces as a Korean youth in the 1910s, when the country was occupied by Japan. The title could be interpreted as a metaphor for the directions life takes based on this choice or that (as balls bounce randomly off pins in a pachinko machine); Sunja eventually makes a momentous decision that leads to her migration to Japan.

When Youn picks up the character, she has been living there for decades. The immigrant who did not speak Japanese — or even know how to read — has managed to thrive and raise two sons. In the late '80s, as the now-elderly Sunja dreams of at long last visiting her homeland, she's asked by her Americanized grandson Solomon for help in a real estate deal.

The 74-year-old actress whose career began more than 50 years ago video chatted with The Envelope about Sunja's strength, the line that moved her the most and how the Oscar has or hasn't changed her.

Q: What was it about Sunja that made you want to play her?

A: When you get old, you don't get excited that much, but this one, it really touched me. Her determination to survive at that time, her honesty, her resilience — it touched me deeply. I felt like I had to play this role.

"Choice" is a very important word to me. [She refers to a crucial decision by Sunja, a spoiler to be discussed here.] I really admired her. I was thinking about myself: If I had a choice like that, maybe I would have [made the easier choice]. All the difficulty she had to go through … she had to go overseas, leave her mother behind, she was struggling ... I really probably couldn't do it, but when you become a mother, strength comes from somewhere. I think that's the strength she got.

Q: The series depicts the very fraught relations between Korea and Japan on a personal level: It's from the point of view of Koreans living — and suffering — under Japanese occupation. I wasn't aware of how common it was for Koreans to migrate to Japan during this time.

A: As workers or to have a better life they went there. Sad thing is, we had the Korean War after that, so they're lost, without a country. They're stuck there. "Zainichi" — the Korean government doesn't accept them. After the war, we were divided North and South. To learn Korean, [Zainichi] have to go to certain schools provided by North Korea. So the South Korean government considers them communist; they don't have passports to come to their motherland. In the novel, Sunja can't visit Korea, but [in the television adaptation], she was visiting Korea 50 years later. [Screenwriter Soo Hugh] did a great job.

They're abandoned by their motherland. I feel so sorry for them. This project is very ... Korea is the center of my being. I wish we could share this story with all Koreans.

Q: What comes to mind when you think of making the show?

A: When Sunja visited her hometown. She felt the ocean she used to dive in when she was 9. [The memory of how] her father was trying to hold his breath like she does. I'm sure she cannot forget that when she touches that ocean.

They started to pour the rain, pour the water on me. [laughs] I was upset at [director Justin Chon]. The sun is going down; we have to get it in one take. He said, "Go down and slowly feel the water." I said, "Stop it. I better be in a hurry because the sun's going down, you're not going to get this shot." I had already [thought through] all my emotions, with my 50 years longing for my father and mother. They're pouring water on me — [gestures a torrential downpour, laughs] "You ruined my whole plan," I was yelling at him.

Q: How have things changed for you since the Oscar win? Are you a big shot now?

A: [laughs] I will never be a big shot. I'm never pursuing awards when I work. It just happened to me, and I was very happy when I got the Oscar. That's the moment. It's not going to change me. I'm going to be myself, always. I'm still living in the same house, have the same friends.

Q: Is there a scene in "Pachinko" you think captures its essence?

A: It was very sad to watch it — I had heard it from my mother, and to see it on the screen ... That time when all the rice was taken by the Japanese. Korean people couldn't eat rice. That line when the rice salesman says he's not supposed to sell to Koreans; only to Japanese. But [Sunja's mother] asks for two [bowls' worth for her newlywed daughter and her husband] — he said, "OK, it's illegal to sell to you, but I will give you three [bowls] so you can eat with your daughter and swallow your sorrow." That line was beautiful.