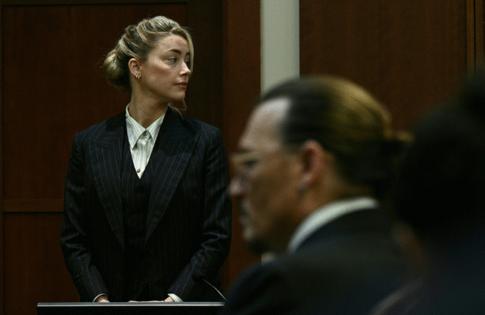 Amber Heard wrapped up her testimony Tuesday in the protracted defamation case being argued between her and ex-husband Johnny Depp — but not before showing flashes of combativeness and annoyance while under cross-examination.

During cross-examination, which was designed to cast doubt on the “Aquaman” actor’s credibility, Heard painted every witness whose testimony contradicted hers as being wrong, mistaken or a person she simply disagreed with.

Asked by Depp attorney Camille Vasquez about a difference of testimony between her and Depp’s driver, Starling Jenkins, Heard implied Jenkins was mistaken.

“I remember everything about that night,” she said, stating she left the 2016 Coachella music festival early after being sickened by a combination of MDMA and hallucinogenic mushrooms. Jenkins had testified that he took her to her hotel alone, while Heard said he drove her home with her friends.

The Coachella trip came the day after a dinner celebrating Heard’s 30th birthday, when she alleges Depp showed up late and later attacked her.

Toward the end of cross-examination, during which Heard looked to the jury with nearly every answer she gave, Vasquez asked Heard who had leaked video to TMZ just days before depositions in their divorce. The recording showed Depp smashing up their kitchen.

“I have no idea. That’s not my area of expertise. I wouldn’t even know how to do that. Plus what does that get me?” Heard snapped. “If I wanted to leak things about Johnny, I could have done that in a much more successful way, for years.”

Regarding her behavior after Depp detoxed from the opiate Roxicodone, Heard testified, “I did a lot of changing to support his sobriety. I tried everything that I could possibly think of.”

Among the least productive moments during Tuesday’s cross-examination came when Vasquez attempted repeatedly to get Heard to clarify how Depp got his hands onto a liquor bottle — which she alleged he used to rape her — while also holding her down just moments after part of his finger was sliced off. Heard was unable to provide an answer.

“To be clear,” Heard said after struggling to understand what she was being asked, “you are putting (the events) in order when you use words like ‘then.’”

Though cross-examination was essentially free of objections from Heard’s legal team, the trial devolved into nonstop objections from Depp’s team and repeated sidebars called by Vasquez and by Heard attorney Elaine Bredehoft. The majority of the objections were sustained, and Bredehoft found herself struggling to find query language that would be allowed during her redirect questioning.

Other than the sidebars, redirect questioning wrapped up rather quickly, with one of Heard’s longest allowed answers coming at the start of her attorney’s inquiries.

Bredehoft’s question to Heard was aimed at rebutting a point made Monday in Vasquez’s cross-examination, when the latter invoked a statement Depp had made in which he promised Heard would “never see (his) eyes again” after they split up.

What, Heard’s attorney asked her client, was the real reason Depp hadn’t looked at her during this trial?

“Because he’s guilty. He knows he’s lying,” Heard replied. “Otherwise why can’t he look at me? I survived. I survived that man and I’m here and I’m able to look at him.”

Testimony continued Tuesday with review of a deposition by Heard’s friend iO Tillett Wright, the person who called 911 to report domestic violence at Depp’s downtown L.A. penthouse in May 2016. The trial, which is being broadcast and streamed live on CourtTV, resumes again Wednesday at 6 a.m. Pacific.

The civil trial is being held in Fairfax, Va., which is the site of servers that host the Washington Post op-ed written by Heard that is at the center of Depp’s $50-million defamation claim. Heard has countersued for defamation, seeking $100 million.

Only retirement on the horizon.

You might not see Steve Martin popping up on your screen for much longer.

The Emmy-winning comedy star, 76, told The Hollywood Reporter in a new interview that once Hulu’s “Only ...Read More