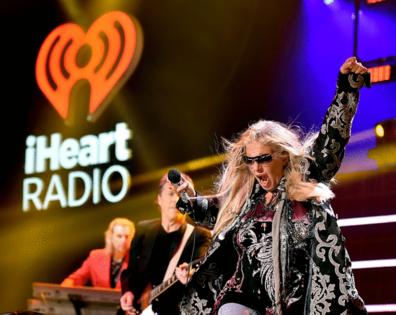 Dale Bozzio was nowhere to be found when our scheduled interview time rolled around, which seems only appropriate for the lead singer of the Missing Persons.

No mystery involved, though — just a dental emergency. And the new wave icon was in a much better place the following day, as she discussed her fascinating new autobiography, “Life Is So Strange — Missing Persons, Frank Zappa, Prince & Beyond” (Cleopatra Records, $39).

The gorgeous 339-page hardcover edition, which includes photographs, as well as an accompanying 7-inch vinyl single, traces Bozzio’s journey from her Massachusetts childhood to her success with the Missing Persons in the 1980s and beyond.

Along the way, we read about her life-changing friendship with Frank Zappa, her romantic relationship with Prince and plenty of trivia tidbits that should please those folks who — like me — still love to rock out to such Missing Persons tunes as “Mental Hopscotch,” “Destination Unknown,” “Words” and “Walking in L.A.”

“Life Is So Strange,” which was co-authored with Keith Valcourt, also covers Bozzio’s marriage to legendary drummer and Missing Persons co-founder Terry Bozzio, who she met through her association with Zappa, as well as the 40-foot-fall from a hotel window that put her in a coma in 1976.

Q: What prompted this autobiography?

A: I thought I should tell my story — I didn’t want someone else to tell it. (When) Prince passed away (in 2016), my son woke me up and told me, and I wept and wept. I got to my desk and started to write. When things hit me deeply, I write. It’s always been my escape in life. I wrote about Prince that day, then thought to myself, “Well, I’m going to continue writing a book.”

Q: This book is filled with so much cool trivia. Who knew you were named after legendary 1940s singer and actress Dale Evans?

A: You picked that out! It’s one of the coolest things ever. I love my name. When people call on me — “Dale” — I answer as if I’m Dale Evans.

Q: One of the most tragic lines in this book is your childhood recollection, “I remember no one hugged me.” That just about broke me.

Q: In the book, you describe your years as a Playboy Bunny as some of the best of your life. I had to laugh when I got to the part where you finally meet Hugh Hefner, and he’s actually wearing satin pajamas and holding a pipe.

A: Exactly how you picture him, that’s how it was. After that meeting, in all the time I spent with Frank Zappa, I always made sure I gave him a present on his birthday — smoking jackets, just like Hugh Hefner.

Q: An invitation to live at the Playboy Mansion brought you to L.A., but you ended up working with Zappa instead. What was that like?

A: There was so much laughter and so much music. I am really good at cracking jokes, and I’m sarcastic all day long. Frank would laugh hysterically.

Terry (Bozzio) and I and Frank would drink cognac some nights. And I would have to go sneak out back and smoke my little joint. There was no smoking weed around Frank. No drugs. None of that. Cigarettes, OK. Cognac, OK. And coffee. Everything else you had to be a sneak.

Q: The association with Zappa, of course, led directly to starting Missing Persons with Terry Bozzio and Warren Cuccurullo.

A: With Terry and Warren, I was in paradise musically. There is just no way around it. I don’t even know how lucky I could be to have that happen in my life — Frank saying one day, “You three should put a band together and call yourselves the Cute Persons.” We laughed and said, “No, Frank, we’re not cute. We’re radical.” So Terry and Warren said, “We’ll name ourselves the Missing Persons” — because we were missing from Frank.

Q: You talk a lot about old flames and flings in the book. I had no idea you had a romantic relationship with Henry “the Fonz” Winkler.

A: Is that so funny or what? I keep looking on Hollywood signing things to try and find him, because I want to call up and say, “Henry, it’s me! Don’t you know what happened? I disappeared because I fell out a window.”

I was dating Henry. We were so cool together. And all of a sudden I disappeared — and he never even cared to find out where I went or what happened to me. I fell out a window and totally forgot about everybody.

Q: Prince was important enough to you that he’s in the book’s title. What was it like dating Prince?

A: It was a big secret. He was secretive about everything he did. And who knows what else he did that we don’t even know about? He was the master of disguise. He was a genius. I am very used to geniuses and how they are awkward and strange.

I don’t want anyone to misjudge him. I know the world loves him. And it’s important to keep it that way.

Q: I had no idea Prince was a Missing Persons fan.

A: That’s how this happened. When he invited me to his house, he played an 8-track for me for eight hours of Missing Persons music. He was originally a drummer, so he loved Terry Bozzio. And he knew my timing was precise. He could tell immediately.

Our relationship was cryptic. He wasn’t very touchy-feely-huggy. Oh, no, no, no.

He asked me to marry him and I said no, I just couldn’t do it. I was taking care of Dale. I was a young girl, looking for fame and fortune. I wasn’t going to give it up to wash his dishes.

Q: If you had said yes, do you think that would’ve indeed been your life — washing Prince’s dishes?

A: Well, I’m an Italian. I do that. I love to cook and clean and take care of things. So I would have been making sure that things were right and clean — and yes, pasta!