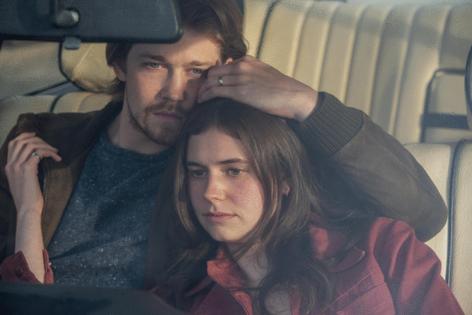 There’s a conversation that bubbles up every so often about the absence of sex scenes in contemporary film: Why is everything so chaste on screen? It’s true that Hollywood is making fewer movies about adult relationships at the moment, but it’s not hard to find serious-minded TV that is filling the gap. “Conversations with Friends,” the 12-part Hulu-BBC coproduction adapted from Irish writer Sally Rooney’s bestselling 2017 novel, puts carnal desires at its center, as well as the more contemplative complications that arise once everyone puts their clothes back on.

Frances (Alison Oliver) and Bobbi (Sasha Lane) are students at Trinity College Dublin. Once a romantic item, they are now platonic but remain inseparable. They perform spoken word poetry together in small clubs and it’s unclear if we’re meant to think they’re any good or not (I’m coming down on the side of “not”). As a pair, they are a study in opposites: Frances can be elusive and ill-at-ease, Bobbi is the self-assured force of nature who’s also sometimes full of baloney.

One night, they meet a glamorous and urbane writer named Melissa (Jemima Kirke, of “Girls” fame) who looks to be a good 15 years older. She invites these soon-to-be college seniors into her orbit, which includes her husband, a shy but semifamous actor named Nick (Joe Alwyn, the longtime romantic partner of Taylor Swift, for those who care about such things). Nick is handsome and awkward and, it quickly becomes apparent, more than a little interested in Frances. The feeling is mutual and it’s as if they’ve suddenly found their stumbling, fumbling misfit counterpart. They throw caution to the wind, consummate their flirtation in secret and things get complicated from there.

I’m sure there will be strong opinions about how well — or not — this adaptation captures Rooney’s voice as a writer. I can’t speak to that, having only seen the series. (Rooney’s novel “Normal People” was adapted for TV in 2020 and is also available on Hulu.) This is well-trodden territory and “Conversations with Friends” isn’t particularly insightful about the nature of affairs. And yet after each episode ended, I found myself drawn to the next.

There’s something hypnotic about directors Lenny Abrahamson and Leanne Welham’s pacing, although I have a gripe with the way they film scene after scene of Frances texting on her phone; if the point is the words on the screen, then get the camera in closer and frame it so the exchange is legible. (This is actually a persistent issue across most TV and film.) Visually, the show is unexpectedly cozy, awash in gloomy greens and grays. Often it’s raining outside. A summer retreat to Croatia offers a brief respite with blue skies, but the story’s thematic undertow remains anything but sunny; sneaking around may generate an erotic charge, but it also stirs up anxieties and jealousies.

What is intimacy without honesty? That question hovers over everything. Monogamy may be a construct, as Bobbi so adamantly declares (it’s a wonderfully dazzling-vulnerable performance from Lane), but relationships fueled by deception aren’t any more enlightened. No one is telling the truth in the tight confines of this domestic drama, but Bobbi probably comes the closest. In the show, she is Black and American, which is a departure from the book, and yet series writer Alice Birch doesn’t allow that specificity to inform the character. (The media critic and professor Kristen Warner calls this phenomenon “plastic representation” which ultimately produces “normatively white characters who happen to be of color.”) Bobbi exists in the story not as her own person so much as a check on her friend’s shortcomings: “Is that how you see me, like my only role is to move effortlessly through the world in contrast to poor you?” she says to Frances, the latter of whom is flummoxed by interpersonal relationships.

Frances is an endlessly confounding character. Though she presents herself as a sweet, delicate ingenue, this belies just how petulant and brutal she can be on an interpersonal basis. The story is told from her point of view and Oliver embraces all of her emotional swings and lack of self-awareness. Oh, that baleful stare she has! Get over yourself, Frances!

But also, her silent judgments and intense navel-gazing are what make her so interesting. It’s a tricky role — she’s utterly strange but also banal — and it would be easy to write her off as exhausting and careless with anyone’s feelings but her own. But it’s a marvelously layered performance from Oliver, who can appear plain one moment, disarmingly gorgeous the next. Watching her, it’s like the sand is forever shifting beneath your feet. Frances is so smart and yet so naive about the universality of human experience. Everyone is going through something, Bobbi tells her. “That’s life, basically. Just more and more stuff to go through.” Bobbi gives her a meaningful look. “Nobody’s going through nothing.” This might be news to Frances.

The series is primarily interested in what her affair with Nick looks and feels like — how it works, and pointedly, how it doesn’t work. Nick is an enigma. In the hands of Alwyn, he gives a good smolder, but his quiet personality shouldn’t be mistaken for kindness. He doesn’t want to leave his wife. He doesn’t want to stop seeing Frances, either. “Conversations with Friends” doesn’t have anything overt to say about this power dynamic, except for a passing conversation in which we learn that years earlier, Nick used to sleep with one of his college professors, who was 45 at the time. That’s not old, Nick insists. “When you’re 19 it is,” his wife replies (Kirke is wonderfully tangy throughout). Frances may technically be of age, but she’s emotionally stunted and inexperienced. Nick is the much older, not to mention married, party here. He’s famous, financially secure and good looking, and his proclaimed need for Frances feels quietly exploitative.

He and Frances might be the most miserable people to ever murmur “You make me so happy” to one another. That’s part of the show’s pull, with all of its contradictory emotions crashing around. Obsessions and betrayals and disappointments are roiling beneath the surface, but stiff upper lips prevail and there can be something airless about that. In a funny way, it mirrors the sex between this pair, who are two of the palest, most blemish-free and fat-free hairless bodies to ever intertwine. Bathed in a soft light, their couplings are almost dainty, without any visible hint of sweat or joy or anything too rapturous.

Even so, there’s something electric in this naturalistic drama about the toxic ties that bind us.

How to watch: Premieres Sunday on Hulu