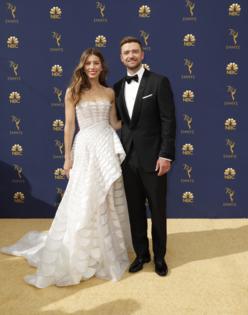 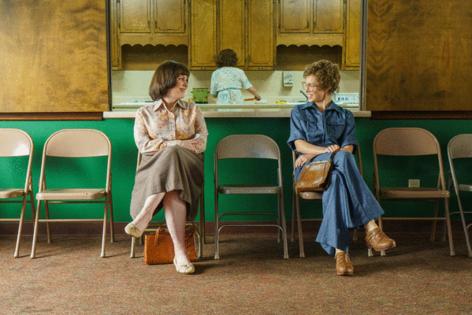 It's the question that everyone watching "Candy" wants answered by the Texas housewife, played by Jessica Biel. And it's finally asked by Steve Deffibaugh, a no-nonsense crime scene investigator played — surprise! — by Biel's real-life husband, Justin Timberlake. The Hulu miniseries is the first scripted project in which the performers are also each other's acting partners.

"We've never shared a scene before," Biel tells The Times. "It was easier than I thought it would be."

The first three episodes dramatize the events around the alleged 1980 ax murder from the perspectives of its key players: the accused killer, Candy; the victim, her best friend, Betty (Melanie Lynskey); and Betty's husband, Allan (Pablo Schreiber), with whom Candy was having an affair. The fourth episode introduces Deffibaugh as an outsider unfazed by Candy's beloved status in her small town and focused on the unsettling sights in the Gore household.

"In reality, Candy's the only one who got to tell her side of the story because she's the only one who walked out of that room," says series co-creator Robin Veith. "But the real Steve Deffibaugh, whom we interviewed numerous times, pretty much figured that she did it. He had a compelling story to tell and was basically arguing for Betty because she never got a chance to speak for herself. It became a very important way for us to give Betty's side as much weight as Candy's."

So how did Timberlake end up in the key (albeit uncredited) role? "We always read each other's material — Justin reads stuff we're doing, and we read things he's considering doing," says Biel's producing partner Michelle Purple. "He called me, said how much he liked the show and asked me about the character of Deffi. He said, 'I see a way in. I think I can play him.' And I was like, 'Whatever. Sure you do.'" (Timberlake was unavailable for comment.)

The idea intrigued Veith, especially since the story's other law enforcement character is played by Lynskey's real-life husband, Jason Ritter. "It became a wildly wonderful thing to me, how meta it was getting," she says. "I thought, we can subconsciously remind the audience, 'Don't take what we're saying here as fact; this is not a docuseries.'"

Biel was the one who needed the most convincing. "I never would have approached him for the part, simply because I didn't think it was big enough for him," she says. "I told him, 'I cannot pay you much of anything. Are you sure?' He's like, 'I don't care. All I want is a prosthetic belly, a wig and a mustache.' And I was like, 'That we can do.'"

Biel, Purple and Timberlake decided early on to keep Timberlake's appearance a surprise until the episode's airing. According to Biel, Timberlake prepared for the role by speaking with Deffibaugh and "just fell in love with him." The married couple ran lines together at home, complete with their characters' Texas accents. "I was nervous that he was going to judge my accent," she says of Timberlake, a Tennessee native.

"Justin has this authentic Southern accent that he can pull out of nowhere and this ability to cultivate the Southern man who you might think maybe isn't intellectual because of his thick accent, which is a terrible mistake that people make all the time," she continues. "Deffi, this guy is so smart and super sharp. And to this day, Candy's story just doesn't add up for him."

Shortly before filming their first-ever scenes together — outside of a "Saturday Night Live" cameo in 2009, in which Biel "was dressed as Jessica Rabbit, with a giant fake butt and giant fake boobs, but I don't count that," she says — Biel and Timberlake were instructed to hide their characters' interior lives.

"I asked them not to talk to each other about it," says the episode's director, Tara Nicole Weyr. "They're incredibly different characters with very specific points of view, and I didn't think that any of their thoughts about their own character should influence the other person."

Biel and Timberlake, along with Ritter, are first onscreen together during an interrogation, and Candy seems to have an ironclad and agreeable response for each of their probing questions.

"You start to see how committed Candy is to believing the lie, but you also see quite clearly that even though everyone around Candy was believing her, Deffi wasn't," says Weyr. Veith describes the scene as "a little bit like jousting or poker — they're all trying to get somebody who's bluffing to fold."

After taking Candy's fingerprints, Deffi asks to take a photo of Candy's battered foot. "I got those playing with my kids — I bruise if the wind hits me wrong," she explains to him without flinching.

Between takes of this tense exchange, Weyr and the actors experimented with their physical positioning. "There was this hilarious moment where Jessica was seated and Justin was on his knee, trying to be at her eye level, but it looked too much like a proposal," Weyr recalls. They ended up with Biel in the corner and Timberlake in front of the door, practically threatening to block it until she answered his direct question about killing Betty.

"We were like these two lions, standing our ground and saying, 'I'm not breaking, are you gonna break?'" says Biel. "I knew he was going to put me in a situation to try to make me, as Candy, feel uncomfortable. I didn't feel that way because I felt so confident while playing Candy, like nothing was gonna shake me.

"But it was interesting to do that with him because we don't do that in our personal lives; we communicate and tell the truth," she says with a laugh. "This is the person I see every day. He's seen me at my absolute worst. He knows my greatest flaws and fears and doesn't use those against me."

Though they're together onscreen for just under three minutes, Biel and Timberlake were, "individually and together, both incredibly collaborative, open to direction and willing to try anything," says Weyr. "I have to be honest: I completely forgot they were together while we were working because they were very committed to their characters and being true to them on set."

Biel is thrilled that Timberlake's role has remained under wraps as planned and says she enjoyed acting opposite him for the first time.

"God, it was just perfect," she says. "Hopefully we'll do it again."