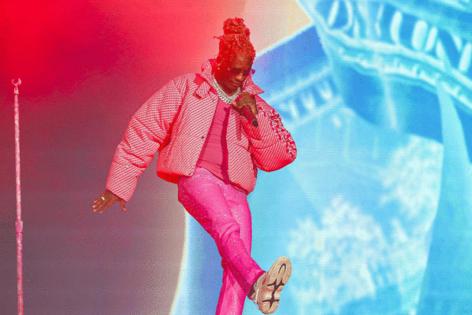 For today’s generation of hip-hop fans, Young Thug is as influential and visionary as OutKast was to previous eras of rappers. His oft-imitated style — melancholy and machine-tweaked, yet melodic and flamboyant — places him right beside Future as the defining act of contemporary Southern rap. His reach goes beyond that, though: Acts such as Lil Uzi Vert, Juice Wrld and Lil Nas X absorbed his radical aesthetics and peacocking subversions, taking them to pop radio and the Grammy stage.

That’s partly why the sweeping gang and racketeering indictment against the Atlanta rap star, born Jeffery Lamar Williams, and 27 others associated with his Young Slime Life crew (including fellow star Gunna, born Sergio Giavanni Kitchens, and Young Thug’s brother Quantavious Grier, the rapper Unfoonk ) came as such a shock to his home city and to the music world.

The 56-count indictment announced Monday alleges that the Young Thug is a central figure of Young Slime Life, or YSL, which Georgia prosecutors say is a gang that committed or conspired to commit a long list of crimes including murder, aggravated assault with a deadly weapon, armed robbery, carjacking, theft and drug dealing.

It’s a twist Young Thug may have anticipated in his music — “Feds came and snatched me, I don’t know, no point in asking” he rapped on 2021’s “Take It to Trial,” which prosecutors cited in the indictment — but now, it could mean a 20-year prison sentence.

Williams’ attorney, Brian Steel, told the L.A. Times that Williams was “not involved with any criminal street gang activity whatsoever” and described the charges as “baseless.” Prosecutors claim in the indictment that Young Thug’s YSL crew engaged in criminal activity in “protecting and enhancing the reputation, power and territory of the enterprise,” thus “demonstrating allegiance to the enterprise and a willingness to engage in violence on its behalf.”

“My number one focus is targeting gangs,” Fulton County District Attorney Fani Willis said at a news conference Tuesday. “And there’s a reason for that. They are committing, conservatively, 75 to 80% of all of the violent crime that we are seeing within our community.”

There has never been another artist as established, popular and culturally important who has been accused of running such a vast criminal conspiracy, with his art used as evidence against him. It’s especially notable that it happened in Atlanta — the only city in America where hip-hop is such a foundational part of its global brand.

“Young Thug is on equal footing with OutKast in terms of what he’s meant to the culture down here,” said Rodney Carmichael, NPR Music’s Atlanta-based hip-hop critic and co-host of the podcast “Louder Than a Riot,” which examines the complex relationship between hip-hop and the justice system.

“This is a cat that, ten years ago, people were laughing about his quirkiness as an artist even while jamming to it, and now he’s grown to be an artist who is more responsible for the sound of hip-hop right now than almost anyone else,” he said.

Young Thug, 30, is much more than a beloved regional stylist — he’s a commercial juggernaut as well. He’s topped the Billboard 200 album charts three times, most recently with 2021’s “Punk,” a typically inventive LP with cameos from megastars such as Drake, Doja Cat and Post Malone. He’s appeared on six Top 10 hits on the Hot 100, including three No. 1s. In 2019, he won a Grammy for song of the year, for his contribution to Childish Gambino’s “This Is America.”