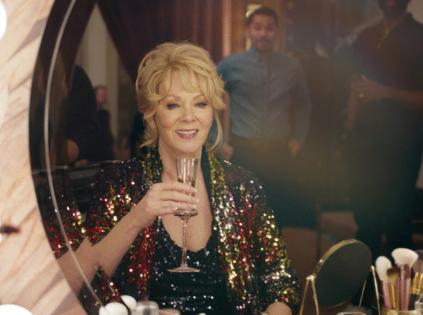 Yes, it's another sitcom about the trials and tribulations of stand-up comedy. But "Hacks" is chiefly about self-serving people paying the price for their ambitions. That theme is even more evident in the second season, which finds veteran comic Deborah Vance (Emmy winner Jean Smart) hitting the road with new material, dragging along Ava (Hannah Einbinder), a guilt-ridden assistant with ego issues of her own. The new episodes have their fair share of laughs, especially when Laurie Metcalf pops in to play a militant tour manager, but it's the soul-baring conversations between Smart and Einbinder that stick with you long after the punchlines. Thursday, HBO Max

This musical featuring sex and silliness on the high seas is primarily an excuse to recycle classic Cole Porter songs. But the showstopper from this 2021 London revival has little to do with witty lyrics. Tony winner Sutton Foster leads the cast in toe-tapping choreography to the title number, a performance so exhilarating that I watched it three times in a row. It's de-lovely. 9 p.m. ET Friday, PBS

"A New Era," the sequel to the beloved British TV series and 2019 film drops (to use a verb that would horrify the Dowager Countess) on May 20. So if you need to refresh your memory on who's sleeping with whom or on which side of the plate the grapefruit spoon goes, you'd better catch up fast. The series is streaming on Netflix, but only through the end of May. The first film, which sets up most of the events of the upcoming sequel, is available to rent on many services, including Amazon Prime. Netflix

Several titles at the Minneapolis St. Paul International Film Festival have been Spanish-language dramas about class and economic inequity, which is practically becoming its own genre. One of the abuelos of the genre is Michel Franco's shocking melodrama, in which a new Mexican revolution begins during a high-society wedding that takes a turn for the violent. Franco, who directed Tim Roth in this year's similarly themed "Sundown," is a major talent to watch. Amazon Prime

"Austin Powers" and "Shrek" allowed Mike Myers the luxury of semi-retirement. He seems to be making up for lost time in this six-episode comedy in which the star/creator plays a multitude of different characters, each having a key role in an evil attempt to take over the world. At times, it feels like he's auditioning for a return to "Saturday Night Live." For every joke targeting conspiracists and billionaires, there are a dozen about bodily functions. Six-year-olds will giggle; grown-ups will switch to "The Spy Who Shagged Me." Netflix