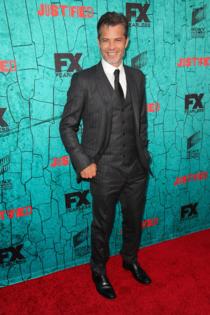 FX announced Friday morning that the team from the Emmy-winning series "Justified" is getting back together for a limited series that will be titled "Justified: City Primeval."

The story will be inspired by Leonard's crime novel, "City Primeval: High Noon in Detroit."

In the limited series, Givens, who is now living in Miami and has a 14-year-old daughter, will head to Detroit after a chance encounter on a lonely Florida highway.

Other characters will include the violent sociopath Clement Mansell, who's known as the Oklahoma Wildman, and Mansell's attorney, Carolyn Wilder, a Detroit native. According to the news release, "These three characters set out on a collision course in classic Elmore Leonard fashion, to see who makes it out of the City Primeval alive."

No airdate has been announced yet.

The original "Justified" series, based on Leonard's "Fire in the Hole" novella, premiered in 2010 and ended its run in 2015. It accumulated numerous awards during its run, including two Emmys, a Peabody and the American Film Institute TV program of the year prize.

Leonard was a consultant for the series up to his death in August 2013 and was a guiding force for "Justified" executive producer Graham Yost, who's among the production members returning for the limited series.

Yost has WWED bracelets made for the original cast and crew, as a reminder to think about "What Would Elmore Do."