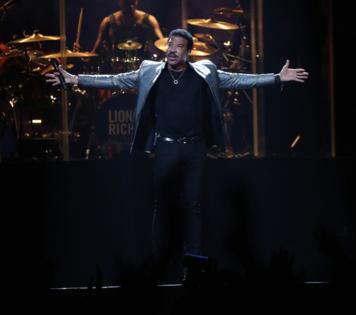 Lionel Richie has another prestigious award to add to his mantle.

The Oscar, Golden Globe and multiple Grammy Award-winning singer-songwriter and producer will be awarded the Library of Congress Gershwin Prize for Popular Song.

Announced Thursday by the Librarian of Congress Carla Hayden, the Gershwin Prize honors a “living musical artist’s lifetime achievement in promoting the genre of song as a vehicle of entertainment, information, inspiration and cultural understanding.”

“This is truly an honor of a lifetime, and I am so grateful ... I am proud to be joining all the other previous artists, who I also admire and am a fan of their music,” the former “Commodores” crooner said in a statement.

Richie, who’s sold more than 125 million albums worldwide, is scheduled to receive the award on March 9 during an all-star tribute concert in Washington, D.C., which will be broadcast May 17 at 9 p.m. ET on PBS stations, at pbs.org and on the PBS Video App.

The 72-year-old Tuskegee, Alabama, native behind timeless classics such as “Hello,” “Endless Love,” “Lady” and his 1983 chart-topper “All Night Long” returns to the judging panel for the fourth season of “American Idol” on Feb. 27.

“In so many ways, this national honor was made for Lionel Richie whose music has entertained and inspired us — and helped strengthen our global connections,” Hayden said of the “We Are the World” co-writer. “Lionel Richie’s unforgettable work has shown us that music can bring us together. Even when we face problems and disagree on issues, songs can show us what we have in common.”