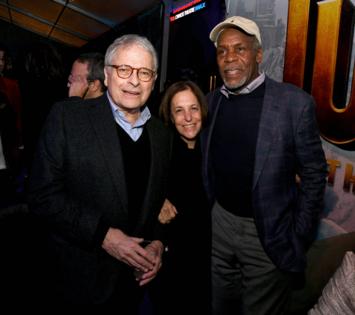 “Grand Canyon” struck a nerve when it hit movie theaters 30 years ago.

With a starry cast that included Kevin Kline, Steve Martin, Danny Glover and Mary McDonnell, the 20th Century Fox release was hailed by critics as an edgy, violent portrait of upheaval and racial tensions in Los Angeles. With its multilayered story and scenes depicting traffic gridlock, gang violence, earthquakes and the Los Angeles Lakers in “Showtime” mode, “Grand Canyon” was ambitious and provocative, going where few major films dared to go. The screenplay, by director Lawrence Kasdan and his wife, Meg Kasdan, earned an Oscar nomination.

Kasdan regards “Grand Canyon” as a hallmark of his career, which also includes “Raiders of the Lost Ark,” “The Empire Strikes Back” and “Body Heat.” He and several cast members celebrated its legacy in The Times last week, saying the film should be held in higher esteem than the later, similarly themed — and Oscar-winning — “Crash.”

But in the wake of the racial tensions now roiling the country and the momentum of the Black Lives Matter movement, “Grand Canyon” should be seen for what it is — an unapologetic paean to white privilege sprinkled with offensive images and racist depictions of Black life. As it did when it was first released, its perspective reflects the overwhelming terror of upscale white professionals that urban chaos is jeopardizing their idyllic lifestyle.

In “Grand Canyon,” dark-skinned people are the enemy and the other, preying on affluent whites. Inglewood is a blighted community of ominously dark streets, marauding gangs and abandoned cars. Black fathers are absent, and the only life young Black men aspire to is thug life. The buzz of circling police helicopters with bright spotlights is constant. Drug deals take place in open daylight outside fenced-off playgrounds.

Black residents live in cluttered, cramped homes with iron bars on their windows and doors, while white households are spacious, clean and plush. The only salvation for Black folks is from generous white saviors.

“Grand Canyon” wastes no time in its opening scenes announcing its fear-based vision. Successful immigration lawyer Mack (Kline) gets lost taking a shortcut home from a Lakers game at the Great Western Forum. He is immediately stalked by shadowy figures blasting N.W.A from their white BMW. His car suddenly stalls, and when he calls for roadside service, the operator hangs up after hearing he’s somewhere in Inglewood.

As Mack waits for a tow, the BMW pulls up behind him and the gang inside, including its armed leader Rocstar, surrounds Mack’s car. But before they can harm him, a tow truck arrives. Carrying a large crowbar, Simon (Glover) calmly steps out and hooks up the Lexus to the truck. He then takes Rocstar aside, asking him to “do me a favor” and allow him to take Mack and his car away.

When Simon tells him there would be no negotiation if he weren’t armed, Rocstar says with a sneer: “That’s what I thought. No gun, no respect. That’s why I always got the gun.”