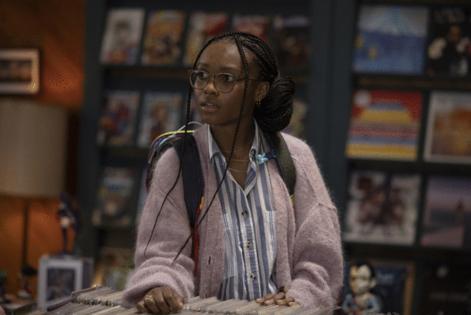 Kaci Walfall has a universe on her shoulders.

The 17-year-old actor plays the title character in "Naomi," DC Comics' panel-to-screen adaptation about an overachieving teen who discovers that she's beyond extraordinary. Good thing Walfall has some superpowers of her own.

"When I'm casting … the hard part is, do I want to be in a relationship with this person for potentially many years? That is something that was apparent very early on in the process with her," said executive producer Ava DuVernay ("Colin in Black & White"), who has another upcoming DC adaptation, "DMZ," for HBO Max.

"When it all comes together — the talent and the personhood, who they are — you get lucky and magic happens, and she's our magic."

Naomi McDuffie — whose last name is a tribute to the revered late comics writer Dwayne McDuffie — is a popular teenager who lives in the military town of Port Oswego, Oregon, and is obsessed with Superman because they're both adopted. When what appears to be her favorite hero is seen fighting above her town, Naomi skateboards to the scene but passes out before she can get the scoop for her fan website. Revelations, surprising powers and menacing antagonists ensue. Soon, she enlists her friends to find out more about the "stunt" and what's happening to her — and to her town.

Naomi — aka Powerhouse in the comics — was created in 2019, a relatively new superhero when it comes to TV adaptations. The show's writers are excited about the room for growth.

"I was such a huge fan of the comic when it came out — Brian Bendis, David Walker, Jamal Campbell's beautiful art. What they created was this incredible foundation. But what was so lovely is that they also really gave us the freedom to kind of make it our own and to really run with it," said executive producer Jill Blankenship ("Arrow").

The comics are just a launching pad, DuVernay says. "Where she'll go in the series will be a different path than where she'll go in the next season of the comics. I think Naomi is a muscular enough character that she deserves and can hold multiple iterations of artists interpreting her just like Spider-Man, just like Batman does."

One might assume that includes the crossover events for which The CW's DC shows have become known, but this is "Naomi's" world.

"I really think that this is the first part of the Naomiverse and that people need to be trying to cross over over here," said DuVernay. "You won't see any crossover Season 1. That's a little spoiler.