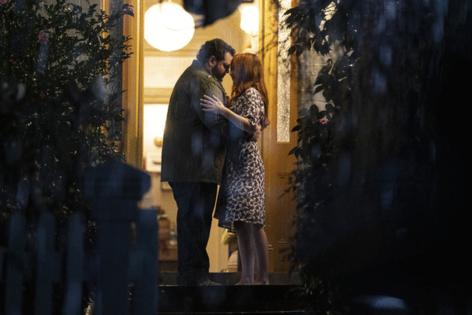 The cast of “Wolf Like Me” can’t tell you much about their show, but they do promise it’s not like anything you’ve seen before.

The Peacock series, part rom-com, part thriller, premiered Thursday and stars Isla Fisher and Josh Gad as two strangers pulled together who have to overcome a mountain of baggage if they want to make this work.

“We wanted to tell a story about how fricking complicated love can be,” Gad, 40, told the Daily News.

“It felt very authentic but it’s told in such a heightened way that you … project your own experiences on it, but there will never be an episode where you aren’t surprised by the turns the show is taking.”

Gad stars as Gary, a single dad in Australia struggling to get through to his daughter after her mother’s death. When Mary (Fisher) blows into their lives unexpectedly, she turns their worlds upside down, a storm cloud of chaos and mysteries, tied up in a bubbly redheaded bow.

Showrunner Abe Forsythe cast Gad and Fisher intentionally, knowing what viewers expect from the two actors. “There’s only so many roles for snowmen,” Fisher joked, alluding to Gad’s “Frozen” role as Olaf the lovable snowman.

“People will have a certain amount of expectations of preconceived notions about what this show is, and a big part of this show and the journey for these characters is realizing that appearances can be deceiving,” Forsythe told The News.

Beyond “Frozen,” Gad has drawn laughs in the live-action “Beauty and the Beast,” HBO’s “Avenue 5″ and “The Comedians,” alongside Billy Crystal, as well as in “The Book of Mormon” on Broadway. Fisher is typically the messy love interest, popping up in “Wedding Crashers,” “Definitely, Maybe” and “Confessions of a Shopaholic.”

But Forsythe directed Gad and Fisher to play it straight, exploring their dramatic sides. There’s plenty of humor in “Wolf Like Me,” but it comes from the circumstances and situations, not the characters.

“The more seriously and dramatically they play the material,” he said, “the funnier it becomes once you realize what they’re actually dealing with.”

What they’re dealing with, though, is being kept under lock and key. Some of it is given away in the trailer, with Gary’s terrified eyes peering through a tiny window as Mary locks herself behind the door. Viewers get hints about Mary’s mysteriously missing husband and her frantically running down the street, clutching shoes, either toward or away from something. But it’s not the specific secrets that matter as much as the existence of them at all.

“How can you successfully manage and maintain a relationship when you’ve got baggage or trauma?” Forsythe said.

“These characters wouldn’t be able to do it unless they met each other. It just so happens that the thing they have to deal with when they come together is the most extreme version.”

It’s extreme, and bordering on preposterous, by design, Forsythe said — he wanted to tell the story about damaged people finding medicine in each other, but he wanted it to be fun.

The happily ever after, Fisher said, is just half of the story. More important than finding a soul mate is the “self-acceptance piece, that you accept your own baggage.”

“In doing that,” she told The News, “it releases some of the baggage and makes you more emotionally available for love.”

A week after his death, Bob Saget got one more show on “America’s Funniest Home Videos.”

A 90-second memorial tribute to the comedian aired ahead of Sunday night’s episode, honoring the “backbone” of the clip ...Read More

NEW YORK — In glitzy Instagram posts and media sitdowns, Tyra Myricks laid claim to the legacy of the man she calls her father — the late and legendary DJ Jam Master Jay.

She boasted in interviews of her executive ...Read More

To binge or not to binge: That is the question. Millions assume the answer is “binge!” and that’s that. If a series is any good, the only options are binge-watch or ignore altogether, since life is short and the ...Read More

NEW YORK — Before he moves on to a whole new world, Jonathan Freeman is enjoying his final magic carpet rides in “Aladdin.”

Pedro Almodovar and Penelope Cruz make beautiful movies together. You watch their latest collaboration, "Parallel Mothers," with simultaneous joy and regret: the former for the way in which the film creates its rich world,...Read More