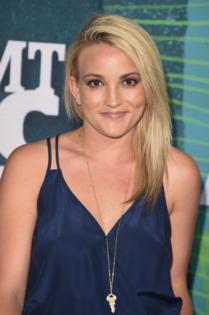 Months after Britney Spears' scathing Instagram post that criticized her younger sister, Jamie Lynn Spears is opening up about her involvement in the conservatorship that long controlled her sibling's life.

And Jamie Lynn wants to be clear: She had a minimal role in the 13-year legal arrangement and tried to help Britney.

Speaking to ABC News in an interview that aired on "Good Morning America" Wednesday, the younger Spears said she was happy when the conservatorship dissolved in November. She also attempted to shed more light on how their father, Jamie Spears, shaped their lives and careers.

The Nickelodeon alum, 30, told co-anchor Juju Chang that she was only 17 and newly pregnant when her sister's conservatorship was instated in 2008. She described Britney's behavior at the time as "erratic, paranoid" and "spiraling."

And the media circus that followed the pop star also latched on to Jamie Lynn, who was a teen mom at the time. It resulted in the family sending Jamie Lynn away to a remote cabin in the Northeast to ride out the pregnancy; she later threatened to file for emancipation, she wrote in her new memoir, "Things I Should Have Said."

"I didn't understand what was happening. Nor was I focused on that. I was focused on the fact that I was a 17-year-old about to have a baby. I [understood] just as little about it then as I do now," the "Zoey 101" and "Sweet Magnolias" actor said of the conservatorship Wednesday.

At one point in the conservatorship, Jamie Lynn had been selected as a trustee of the pop superstar's multimillion-dollar estate, and appeared to be seeking more control over Britney's fortune in August 2020 amid an increasingly heated struggle over the complicated arrangement. However, she later withdrew her petition.

Jamie Lynn explained that her involvement came at her sister's behest: That there was a time when Britney asked her to have a role in her will and trust, specifically to be the person to make sure Britney's sons "got what they needed."

"I thought that was a very normal thing. Once I realized that, you know, she's in a conservatorship, I just didn't want to be a part of [it] until she was out of the conservatorship," she said. "So, there was no me overseeing funds or something like that. And if there was, then it was a misunderstanding. But either way, I took no steps to be a part of it."

She also said she tried to give Britney the resources she needed to end the conservatorship, revealing that she had been in touch with her previous legal team ("That did not end well in my favor") and wanted Britney to have her voice be heard in the legal arrangement.

Representatives for Britney Spears and Jamie Spears did not immediately respond Wednesday to the Los Angeles Times' requests for comment.

Britney, 40, has spoken out against her family in court and on social media, specifically about her disdain for her sister. The "Toxic" hit-maker also has expressed that she'd like to sue her family for being complicit in the conservatorship.

But Jamie Lynn appeared confused by the rift and said that Britney was a second mom to her.

"That love is still there 100%. I love my sister. I've only ever loved and supported her and done what's right by her. And she knows that. So I don't know why we're in this position right now," she said, telling Chang that she often tried to protect her sister to her own detriment.

Jamie Lynn appeared on the program to promote her new memoir, which discusses her life and mental health experiences with anxiety, depression and obsessive compulsive behavior. She also talks about her unstable upbringing as her father struggled with "bouts of drinking" when she was a teenager.

"He spent most of my life in that cycle of ruinous behavior," Jamie Lynn wrote in the book.