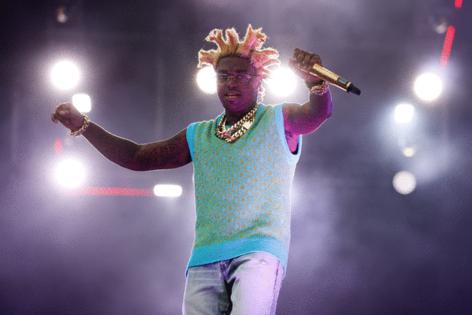 MIAMI — Kodak Black made a trip out to Sunrise to watch his hometown Florida Panthers play the Vancouver Canucks on Tuesday.

He seems to have had a great time.

The rapper, who’s originally from Pompano Beach and is wildly popular across South Florida, spent part of the game sitting rinkside with a woman and, at some point, they moved up into a suite at FLA Live Arena, next to the Panthers’ executive box.

In the third period, a Twitter user and season-ticket holder, with the handle @David954FLA, filmed Kodak Black and the woman in, let’s just say, a compromising position, with the woman on all fours and Kodak Black gyrating behind her.

While the Miami Herald was not able to confirm exactly what actually happened, Bally Sports Florida’s Katie Gaus reported both were clothed throughout the duration of the act and they were just twerking and the original videographer later tweeted, “they weren’t having sex lol.”

The Panthers made a point to show Kodak Black on the big screen several times during the first few periods and the NHL even tweeted about his presence at the arena.

They did not show him again.

For what it’s worth, he seemed to enjoy himself throughout the first two periods, too. He posted a video of himself drinking beer on his Instagram, basked in cheers when he was shown on the big screen three separate times and even got to meet Viktor E. Ratt.

Florida has the best home record in the NHL this season and the arena has found a unique charm in an atypical hockey town. Kodak Black added a uniquely South Floridian character to it Tuesday.

The Panthers, meanwhile, won for the sixth time in seven games and are tied with the defending-champion Tampa Bay Lightning atop the NHL standings. No matter what happened, it’s good to see local celebrities come to support a Stanley Cup contender and it was nice of Florida to take care of business so quickly, leaving everyone plenty of time for other activities.

Veteran comedian Louie Anderson, who won a supporting actor Emmy for playing a version of his own mother in the FX comedy “Baskets,” has died. He was 68.

Writer-director Bruno Dumont’s “France” gives Léa Seydoux, most recently in “The French Dispatch,” a full range of emotions to tap. Some are real, some are reality-adjacent, some her character puts on like an ...Read More

The tastemakers at HBO cordially invite you to "The Gilded Age," a feathered and flounced costume party disguised as a premium-cable period drama. Even if you have a weakness for snobby servants and heroines with parasols ...Read More

It wasn’t easy on her.

Adele is postponing her Las Vegas residency because of preparation issues due to COVID-19.

“My show ain’t ready,” the “Easy On Me” singer said Thursday in a tearful Twitter video. “We...Read More

They will love him forever.

Cher and Boy George were among the celebrities mourning the loss of Meat Loaf, the bombastic singer well-known for hits like “I’d Do Anything for Love” and “Paradise by the Dashboard ...Read More

Movies can win the Oscar for best picture without earning a screenplay nomination. But it doesn't happen often — just seven times in the 93-year history of the Academy Awards and only twice in the last six decades.