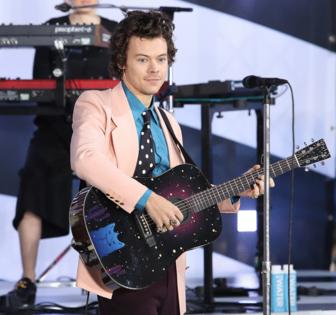 According to a source, the British pop star (and former One Direction heartthrob) will headline the 2022 edition of pop music's highest-profile festival, which is scheduled to go down April 15-17 and April 22-24 at the Empire Polo grounds in Indio.

The news was first reported in Billboard.

The show will mark the first time Coachella has taken place in three years, after the 2020 and 2021 editions were canceled due to the COVID-19 pandemic. A huge moneymaker for Goldenvoice, the Los Angeles-based promoter that puts it on, Coachella in 2020 was supposed to feature Frank Ocean, Travis Scott and a reunited Rage Against the Machine.

Last August, Goldenvoice chief Paul Tollett told the Los Angeles Times that Ocean would headline the show in 2023. Scott reportedly dropped off the lineup after 10 attendees of his Astroworld festival died in Houston in November; Rage is said to have pulled out as well.

A Goldenvoice representative didn't respond immediately to a request for comment on Styles' booking.

Chris Brown is hitting back at sexual assault claims in a new lawsuit.

The Grammy Award-winning R&B crooner is being sued by a woman, identified only as Jane Doe, who alleges that she was drugged and raped by Brown on a ...Read More

NEW YORK — No one is quite sure when (and if) Wendy Williams will return to her eponymous chatfest.

But in the meantime, the show will go on with a new line up of guest hosts throughout the month of February, following ...Read More

Marvel star Evangeline Lilly revealed Thursday that she marched in the nation’s capital last weekend to support “bodily sovereignty” and being pro-choice during a protest against COVID-19 vaccine mandates.

Oh, toodles! Minnie Mouse will be changing out of her iconic red-and-white polka-dot dress in March to celebrate Disneyland Paris' 30th anniversary and International Women's Day.

Her statement bow, however, will remain ...Read More

LOS ANGELES — According to the usual rhythms of Oscar season, Hollywood’s awards machinery should be running at full steam right now. With Academy Award nominations set to be announced on Feb. 8, stars and industry ...Read More