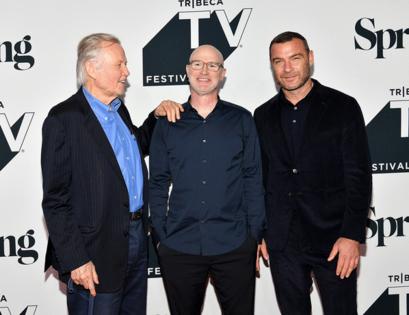 PITTSBURGH — David Hollander was planning an eighth season of "Ray Donovan" when Showtime unceremoniously canceled the long-running drama in early 2020. Why else would a showrunner begin introducing the history of the Donovan family so late in the show's seventh season?

"We didn't know it was coming," the 53-year-old Mt. Lebanon native told the Post-Gazette. "So when it did come, we were upset, a little surprised, confused a bit. We just felt that we hadn't finished the story and both Liev [Schreiber] and I were pretty vocal about that, and more so the audience was very vocal."

Fans also were shocked and Showtime was clearly paying attention. Showtime announced in February that "Ray Donovan" would return as a feature-length film that would provide fans with the closure they craved. Viewers would finally learn what happened to Ray (Schreiber), his father, Mickey (Jon Voight), his daughter, Bridget (Kerris Dorsey), and the rest of the Donovan clan following a bloody and revealing Season 7 finale.

"Ray Donovan: The Movie," premieres Friday at 9 p.m. ET on Showtime. It features most of the show's main cast and was directed and co-written by Hollander. It wasn't easy wrapping up a beloved series with one made-for-TV movie during a global pandemic, but Hollander feels he and the "Ray Donovan" gang pulled it off with aplomb.

"Some challenges are super fun," he said. "When Liev and I decided to write it together and bring in a bunch of years of history and story and narrative, we knew something would come of it. Once we found the vein of the story and once the framing devices and narrative twists made sense, it seemed like that was the perfect way to end.

"I'm sure if I had done eight episodes, I would've found another way to do it. But the movie felt like the right way to do it."

Ironically, Hollander grew up in a Mt. Lebanon family that prioritized theater over television. He would go to five or six plays a year thanks to his parents' subscription to Pittsburgh City Theatre and initially wanted to become an actor. A young Hollander could be found performing in shows at the Little Lake Theatre in Canonsburg or appearing in whatever commercial work Donna Belajac of Donna Belajac Casting could get him.

His Pittsburgh sports fandom runs so deep that he still has hopes for the flailing Pirates. Hollander was at PNC Park for the 2013 National League Wild Card game where the Pirates defeated the Cincinnati Reds, and he said the "electricity at PNC that night was unbelievable."

"I still love and adore Pittsburgh," he said. "I had a relatively typical Pittsburgh upbringing in the '70s and '80s. It was a complicated time for the city. ... But the community was incredible and the sports teams were unbelievable. The connection that I felt to my neighborhood and friends and family was profound."

Hollander's devotion to his hometown ran so deep that he set and partially filmed his CBS drama "The Guardian" in Pittsburgh. The show ran from 2001 to 2004 and Hollander said that "Pittsburgh was so incredibly supportive" of that endeavor. Because he still knows many folks here, Hollander joked that one minute he'd be shooting a scene on the South Side and the next he'd be turning around to find "a buddy I wrestled with in high school flipping me off."

For "Ray Donovan," Hollander was excited to sink his teeth into this story of a professional "fixer" and his twisted family that would give him an opportunity to work with world-class actors like Schreiber and Voight.

"I was really motivated almost entirely by the quality of the cast," he said. "I just wanted to work with those actors. Whether the show lived or died, I wasn't thinking that much about it initially. I was thinking about how interesting it would be to write for this group of actors and to tell stories I like to tell — complicated family stories up against lacerating Hollywood satire."

Like the latter part of Season 7, "Ray Donovan: The Movie" features flashbacks and young versions of characters like Ray and Mickey to help understand how their lives became consumed with violence and criminal activity. Hollander said he felt that particular storytelling device was "appropriate for the state of mind Ray was in" after the events of the show's final season.

A lot of what fans will see in "Ray Donovan: The Movie" are scenes and narrative elements that Hollander was tossing around for a potential Season 8. He said the movie is his chance to do right by the show's creative team and "say goodbye to them in a more profound way."

Though Hollander is aware that some fans may not find the ending satisfying, he said "Ray Donovan: The Movie" will offer concrete answers to many lingering questions.

"Narratively, it feels like we completed this story," he said. "I don't know if there's another story to tell. It's a dynamic group of actors and characters, so you never know. It's a question of time and desire, because this was a big undertaking.

"If we ever return, it would have to be on the heels of a lot of things coming together."

Kid Rock's new single "We the People" slams social media, the news media and the president of the United States before making a plea for coming together.

"We the People" is the most incendiary of three new tracks the ...Read More

As someone who has raised two daughters during the age of Taylor Swift, I have a lot of mixed feelings about her music.

While it is admittedly unfair to blame anyone for their thrall over a certain demographic, it is also...Read More

Jennie Nguyen will no longer hold a snowflake.

"The Real Housewives of Salt Lake City" cast member has been fired by Bravo as a result of offensive Facebook posts from 2020 that resurfaced last week. During the height of ...Read More

The “I’m Still Standing” singer expressed regret for not being able to perform on Tuesday or Wednesday, but assured fans he followed...Read More

Queen Latifah is speaking out about the firing of her co-star Chris Noth in the wake of recent sexual assault allegations — and she hopes justice will prevail.

Noth, who was accused of misconduct by several women in ...Read More

Chris Noth was promptly dumped from “The Equalizer” after multiple women accused him of sexual assault. Co-star Queen Latifah says it was the right move, no matter how much it messed with the storylines.