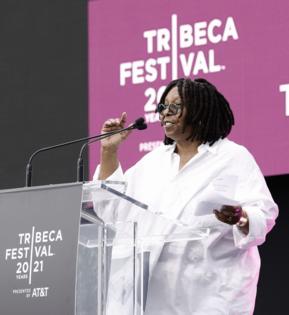 What’s old will be new for Whoopi Goldberg for an upcoming gig.

The EGOT recipient has been tapped to executive-produce and star in a new Paramount+ series based on the 1991 comedy “Soapdish,” which spoofed the backstage antics of a popular soap opera.

Produced by CBS Studios in partnership with the NAACP, Goldberg will reprise her role as Rose Schwartz, the head writer of fictional soap opera called “The Sun Also Sets,” for the new show.

“The current political and societal landscape demand that we expand the voices, contexts, and visibility of artists producing content around the African American experience,” NAACP president & CEO Derrick Johnson said with the announcement. “Great storytelling has a unique ability to entertain, educate, and influence perspectives on critical issues. The projects stemming from the NAACP partnership with CBS Studios will continue to push the boundaries on the variety of stories available to audiences.”

Comedians attached to star in NAACP-CBS Studios projects also include D.L. Hughley and Earthquake headlining autobiographical comedy series in the works at Fox and CBS.