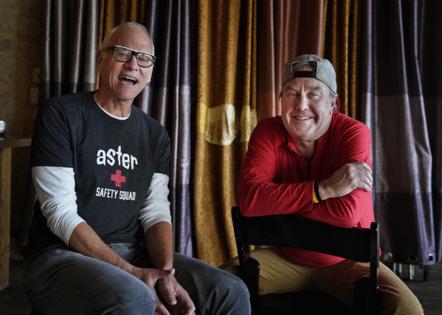 That's right: Instead of having "Soul Asylum" emblazoned across the carrier in which he hauls his assorted pedals and accessories, the name on Murphy's road case these days reads "Rubbermaid."

A sign of how far removed he had become from the music business after three decades in two of its best loved rock bands (also: Golden Smog), Murphy's ultra-low-tech carrier also symbolizes how unintentional and fun it is to be playing again.

"This has all been very impulsive, and I think that's made it even better," the self-exiled Minneapolis rock vet said of his new band, the Scarlet Goodbye.

Actually quite a polished and ambitious new project — never mind the lo-fi hauler — the group started on a whim right before quarantine set in last year after Murphy befriended another longtime staple of Minnesota music, singer/songwriter/producer Jeff Arundel.

The proprietor of the music-friendly Aster Cafe and two neighboring restaurants, Arundel's varied and variously successful music career ranges from his heartfelt novelty hit "Harmon Killebrew" to his old concert promotions company Compass to the nature-y "Lifescapes" CDs he produced for aisle endcaps in Target stores in the late '90s.

Arundel, 63, had never actually met Murphy, 59, until the guitarist became a regular at the Aster a few years ago.

"It might be the unlikeliest matchup in Minnesota music history," Arundel mused. "Dan would learn an entire Aerosmith record as a kid, and I'd learn a James Taylor song."

Added Murphy, "I really didn't know anything about Jeff's career, and he probably knew that song about the train and that was it from my career."