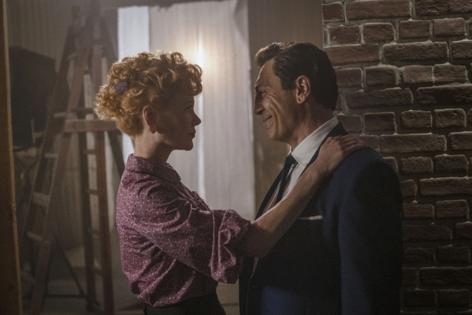 There are so many reasons writer-director Aaron Sorkin’s “Being the Ricardos” doesn’t work, from the writing to the casting to the pushy scoring, but more than anything it’s the way it reduces talented and complicated people to their blandest form.

Nicole Kidman and Javier Bardem were never the obvious choices to play Lucille Ball and Desi Arnaz (nor was Cate Blanchett, who was originally circling the project before Kidman) and that’s not necessarily the issue here — I’m always curious to see actors tackle an unlikely role — but is an issue. So much of Kidman’s physicality as an actor is rooted in the length of her body, whereas Ball’s expressiveness came from her face and that dictated everything else. Bardem is giving a smoothly confident performance, but he has a very specific, almost rounded vocal quality that is nothing like Arnaz’s nasal delivery. These are fundamental disconnects in a movie that doesn’t ask its stars to disappear into their roles so much as play them with an enthusiastic approximation, and so you squint and try to see what Sorkin evidently saw when he cast them. It’s also fair to wonder why, when Latinx actors remain underrepresented in movies — and here’s a movie with a lead character who is Cuban — Sorkin decided to go with a Spanish actor instead. But even beyond Kidman and Bardem’s committed, if floundering, individual approaches to the material, there’s simply no heat between them, which the script keeps telling us is the thing about this couple off-screen.

Once you realize that every interior space they occupy has the uncanny look of a set, you might think their lack of chemistry was an intentional choice, and that might have been an interesting gambit if there were some actual ideas behind it — “Being the Ricardos” could have been a study in the artificiality not only of Hollywood but of this sometimes unhappy marriage that was portrayed otherwise on “I Love Lucy.”

Insidery but empty, the film takes place during one extremely tense week in 1953 leading up to a taping of their show, when Ball was accused of being a Communist, but Sorkin isn’t particularly curious to go poking around the performative concept of what it means to be suitably American in the eyes of power brokers. Tonally, “Being the Ricardos” is a live-action Wikipedia entry filmed in a flat sepia wash that tends to set everything off in air quotes: “Here is the Lucy and Desi story, fraught with snappy lines and snappier drama.” You never lose yourself in these performances because Sorkin never gives his actors — or the audience — anything to lose themselves in.

It’s not clear even what story Sorkin wants to tell. It’s a week-in-the-life (dotted with flashbacks and faux contemporary talking head interviews) but the film doesn’t have much to say about what made Ball so funny. We see Kidman flip between Ball’s natural speaking voice and that of the Lucy persona and it’s hugely effective, but we don’t see the choices that led her there, or what makes her laugh in real life. Or even what a legitimately funny or zany moment actually looks like on screen. There’s no real concept of how to portray the making of television into the stuff of either comedy or drama, which is the same trap Sorkin’s short-lived TV series “Studio 60 on the Sunset Strip” fell into, treating comedy as a punishing intellectual endeavor. And so we get Lucy agonizing for days over the blocking of a dinner party scene and it’s meant, I suppose, to capture her exacting instincts and stubbornness, but also how desperate she is to distract herself from the possibility that her career is about to implode. But how she actually feels inside these moments remains a mystery. You don’t come away with a deeper understanding of this moment or any of the people in it.

Ball and Arnaz’s faces, voices and mannerisms are burned into the cultural memory, and while you don’t want mimicry, you want it to feel right, a quality that’s hard to define and harder to achieve. You’re hoping for something transformational but recognizably human, and it has something to do with pushing past whatever preconceptions audiences already have. Sorkin’s approach is to focus on the things that are happening rather than to inquire as to the contours of Lucy or Desi’s internal monologues, and so they remain unknowable, moving through a biopic that offers little more than an exercise in reenactment.

Where to Watch: In theaters Friday; streaming on Amazon Prime Dec. 21