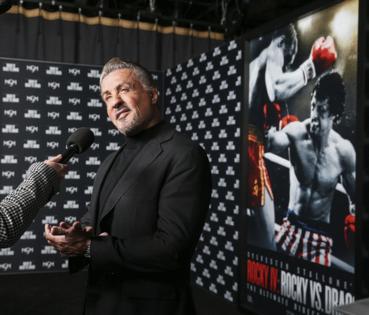 Before his big breakout role in "Rocky," Sylvester Stallone survived as a young actor making guest appearances on TV shows like "Kojak" and "Police Story."

Now the Academy Award-winning actor is heading back to the silver screen as a star and executive producer a new mob drama for Paramount+ called "Kansas City," according to Deadline and The Hollywood Reporter.

The show would feature Stallone as a present-day New York City mobster named Sal, who is forced to relocate to Kansas City and reestablish his Italian mafia family in the straight-laced Midwest city. No other co-stars have been named, and no production or release dates have been announced.

The Gang sets a record: 'It's Always Sunny In Philadelphia' becomes the longest-running live-action sitcom ever

"Taylor is a prolific creator because of the multi-dimensional characters he creates and the complex worlds he builds," David Glasser, the CEO of production company 101 Studios, said in a statement. "To be able to have the legendary, transcendent Sylvester playing one of these characters is truly a privilege. And on top of that, we have Terence producing the project with us, who is responsible for some of the most captivating, deeply respected television shows in history."

Last month, Stallone released a new version of the 1985 film "Rocky IV" with 40 minutes of never-before-seen footage. He also removed a number of goofier scenes from the movie, including the infamous robot he gives to his brother-in-law, Paulie.

Stallone also revealed that he wouldn't have killed off Apollo Creed, played by Carl Weathers, if he were to remake the film today.

"It was foolish," Stallone said in a behind-the-scenes documentary about the reedited movie. "I thought I needed that kind of springboard to propel the drama on this really great, powerful velocity moving forward. Him in a wheelchair, he would've assumed the role of Mickey. And now, his physicality has been diminished, we would've seen a different side of Apollo. He could've opened up to all these other things that we didn't even know about. He would've been kind of a father figure, brother, mentor."

Stallone admitted that Weathers wouldn't be happy to hear his supporting role in the "Rocky" film franchise might have continued on into the current "Creed" movies.

"He's going to be pissed off, very pissed off," Stallone said. "Sorry, Carl."

Appreciation of the "Rocky" franchise continues to endure 45 years after the first film’s release. Stallone’s original handwritten pages from "Rocky’s" Academy Award-winning script recently sold at Julien’s Auctions over the weekend for $437,500, and the American flag boxing trunks the actor wore in "Rocky III" fetched $200,000, 20 times what they were expected to go for.

As for Sheridan, "Kansas City" would be his third project for Paramount+. "Mayor of Kingstown," starring Jeremy Renner, premiered last month, and the "Yellowstone" prequel "1883" is scheduled to debut on the streaming platform Dec. 19.