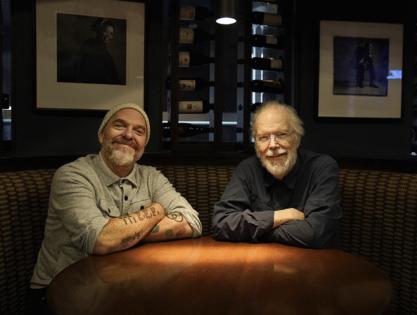 MINNEAPOLIS — Leo Kottke's fingers flew across his acoustic guitar with determined fury. Dave King's brushes skittered atop his snare and tom-tom drums with understated artfulness. The two musicians had found a groove in their unchoreographed pas de deux.

And they knew it.

Kottke's feet involuntarily danced a jig. A blissful smile overtook King's face as he stared at the guitarist's fingers. Both players seemed oblivious to their audience at Jamf Theatre, an intimate black-box theater in Eau Claire, Wisconsin.

Meet Minnesota's latest — and potentially greatest — super duo: Kottke, the dazzling Hall of Fame guitarist, and King, the gonzo percussionist from the Bad Plus, Happy Apple and a score of other bands.

"The Kottke King Experience!" the guitarist joked backstage after a recent gig by the new duo.

Both musicians have quick but quirky senses of humor. The socks they wore in Eau Claire hinted at their light-heartedness: black-and-white horizontal stripes for the percussionist and cartoon ghosts with the word "boos" for the guitarist.

Even though they are 25 years apart in age, the musicians' personalities, funny bones and musical sensibilities have meshed.

"The first time I went over to his house, we played [music] a little bit and Dave ate some of my food," Kottke recalled. "I've stabbed people for that with my fork. But [with King] it made sense. We were cracking up."

Kottke and King did not exactly meet cute because, well, their matchmaker failed to show up. Twin Cities bassist Billy Peterson invited the two musicians to a recording session last year at Creation Audio in south Minneapolis.

CHICAGO — Sometime within the first 15 minutes or so of the first episode of “The Book of Boba Fett,” the new “Star Wars” series on Disney+, there’s this guy with thick, meaty tentacles streaming out of his ...Read More

Despite more than two years of being anchored with family in Iceland and nearly as long without looming artistic deadlines, Björk sounded a little out of breath during a recent phone conversation from Reykjavik. She was ...Read More

Three years ago, Sujata Day decided to take the biggest leap of her career: she would direct and star in her own feature film, "Definition Please," about a 20-something former spelling bee champion still living at home in ...Read More

When a reader wrote to me, looking for a list of sunny movies to give to a friend facing tough times, it occurred to me: We all need that list.

But what qualifies as a joyful movie? A really good one? That's a great place...Read More

The underdog story of this Academy Award season centers around a yak that marks the nation of Bhutan’s first Oscars submission of the century.

Filming “Lunana: A Yak in the Classroom” in the heart of the Himalayan ...Read More