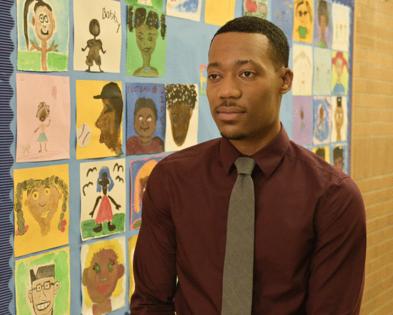 The fake school bells on the set of his new show send Tyler James Williams back to elementary school in Yonkers. This time, though, he’s on the other side of the desk.

Williams, the son of a former NYPD sergeant, stars as new teacher Gregory Eddie in “Abbott Elementary,” a warm-hearted sitcom about struggling teachers at an inner-city elementary school in Philadelphia that premiered Tuesday on ABC.

Portraying a teacher helped Williams build a good rapport with the young actors playing his students — and a new appreciation for his own teachers while growing up.

“The relationship that you find that you build with the kids, I found myself reevaluating the relationships my teachers must have built with the very creative and sometimes hard-to-focus child that I was myself,” said the 29-year-old Williams, a former child actor who starred in “Everybody Hates Chris” when he was a teen.

“I don’t have any kids so I don’t interact with children this much on a daily basis. It’s wild to see how quickly you become attached and you feel responsible for the period of their life that you have them and guiding and helping along their journey.”

“Abbott Elementary” doesn’t have the luxuries. It barely even has the basics — in the pilot, Janine (creator Quinta Brunson) has to go viral on TikTok just to raise enough money to buy a new rug for her classroom.

None of this is easy, especially for Greg, who thought he would jump right into a school as a principal. His learning curve is figuring out his path along his new road.

It’s not all doom and gloom and homework though. The sitcom finds heart and humor in the resilience of its teachers despite a tone-deaf principal (Janelle James) who doesn’t actually seem to care. The veterans (Sheryl Lee Ralph and Lisa Ann Walter) have created a system to get by, while Janine, not yet defeated by reality, still fights for more.

“One of the hardest-working people in America is the inner-city schoolteacher who’s underfunded, who can’t have enough time … to prep and teach and referee and be a moral compass for these kids in an atmosphere where they’re so inundated with stimuli in a great city,” Williams told the Daily News.

Williams, whose last in-person schooling was sixth grade before he left to pursue acting, hopes his new comedy series can help send a serious message about the poor state of the country’s public education system.

“If this show can move the needle a little bit and get us closer to a reasonable funding package for teachers and educators in public schools around the country, then we did something other than just make you laugh,” he said.