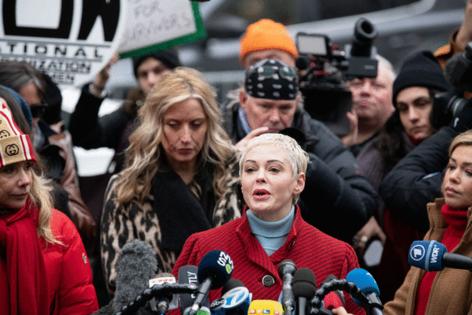 In October 2019, McGowan filed a RICO suit against Weinstein — who is currently serving a 23-year prison sentence for rape and sexual assault — and his attorneys David Boies and Lisa Bloom, as well as Black Cube, a private investigation firm that was allegedly hired to dig up dirt on McGowan in order to silence her.

The 72-page complaint, filed in U.S. District Court in Los Angeles, alleged McGowan's career as an actress and author, as well as her mental health, "suffered tremendously" because of Weinstein's efforts. It sought unspecified damages for an array of offenses, including allegations of fraud and conspiracy.

"Harvey Weinstein was able to perpetrate and cover up decades of violence and control over women because he had a sophisticated team working on his behalf to systematically silence and discredit his victims," McGowan said in a statement at the time. "My life was upended by their actions."

The lawsuit focused mainly on a series of events over several months in 2017 as McGowan prepared to publish a memoir, in which she says Weinstein raped her in 1997. Weinstein has denied the allegation.

Last December, Judge Otis D. Wright dismissed most of McGowan's claims in the 2019 lawsuit but allowed her to pursue two fraud complaints and amend her RICO allegations.

However, on Nov. 9, the judge ruled that the amended complaint did not reach the standard for racketeering or organized crime.

Two weeks later, McGowan's attorney informed the court that the actress had fired her and withdrew from the case.

After McGowan, who represented herself in court, missed a Dec. 3 deadline, Judge Wright dismissed all claims.