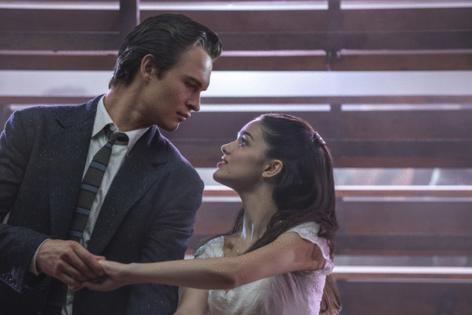 There is only one word to describe Steven Spielberg’s remake/revival of “West Side Story”: dazzling. As Janusz Kaminski’s wildly liberated camera swirls around the flying limbs of the Sharks, Jets and everyone caught in the middle, set to the familiar strains of Leonard Bernstein’s music, the cinematic spectacle is simply overwhelming.

The text has its roots in Shakespeare, was conceived for the stage by Jerome Robbins, written by Arthur Laurents, with lyrics by the iconic Stephen Sondheim. It is quintessential American art that is fundamentally about being American; both the incredible possibilities, and cruel limitations of the American dream. Now one of America’s master filmmakers, along with screenwriter Tony Kushner, rejuvenates the story for a modern audience with a new generation of stars, and the story takes on new shades of resonant tragedy.

Set in the late 1950s, Spielberg’s “West Side Story” is as much about 2020s America as it is about the midcentury, and the issues that continue to drive rifts in our nation, including racism, wealth inequality and angry young white men with guns. Kushner’s script capably draws out the contemporary parallels. When we first meet the electrifying crew of Jets, led by breakout star Mike Faist as Riff, Lt. Schrank (Corey Stoll) lectures them about fighting with the Puerto Rican Sharks, but he also mentions the slum clearance project to build Lincoln Center that will soon displace the Sharks and the Jets. The message is clear: why are they fighting with each other over turf when the real oppressor pushing them out is the government?

Kushner does not let the Jets off easy, make no mistake. While the crew remains magnetic on screen, Kushner and Spielberg use writing, performance and subtle changes to the songs to tangle brilliantly with the issues presented by this mob of young men motivated to racist violence. Faist’s Riff is harder, his performance more devastating than the charming, mischievous one delivered by Russ Tamblyn in the 1961 film. Riff doesn’t perform the rousing “Officer Krupke” number, while the rest of the Jets do in a dizzying tornado of movement set in the police station. The song, which used to feel like an irreverent, darkly humorous take on the social ills that plagued them, now sounds like the excuses made by, and made for, violent young white men when they’re brought before the law.

“West Side Story” is a romance first and foremost, even if the social commentary is far more complex and interesting. The star-crossed lovers Tony (Ansel Elgort) and Maria (Rachel Zegler), he of the Jets and she the sister of Sharks leader Bernardo (David Alvarez), are the doomed Romeo and Juliet, offering the story its emotional stakes. If there’s a weak link to be found in “West Side Story,” it’s Elgort, the one known entity among a cast of exciting newcomers. The Tony character has never been all that compelling anyway, but Zegler, with her yearning, youthful visage and crystal clear singing voice, owns the romance. It’s a stunning debut for the charismatic young actress, who was discovered on Twitter.

Spielberg’s “West Side Story” celebrates the original film, but also meaningfully experiments with and engages with the text, flushing out new meaning even if the experiments aren’t always successful, such as a reimagining of “Cool” as a desperate plea between old friends rather than a lament. Similarly, the Puerto Rican characters frequently speak Spanglish or Spanish without subtitles, which asks non-Spanish speaking audiences to engage with the performances and emotions on a deeper level.

These changes to the original offer the kind of necessary friction a work as beloved as “West Side Story” needs in a new iteration. Kushner, Spielberg, Kaminski and the cast of soon-to-be superstars breathe new life into the work, while paying tribute to the grandeur of the original production. The result is nothing less than an incredibly thrilling piece of work that links the old and the new in fascinating ways.