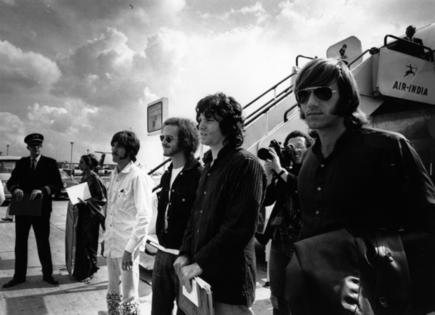 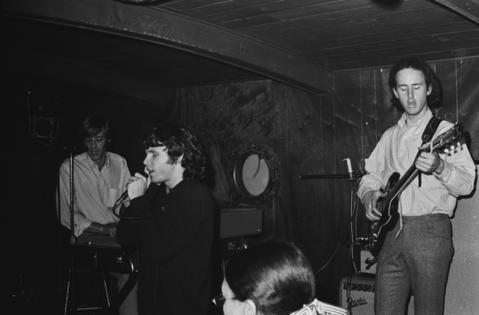 LOS ANGELES — During the period in late 1970 and early '71 when Jim Morrison and his bandmates in the Doors were recording their sixth and final studio album, "L.A. Woman," at their West Hollywood rehearsal space, the singer was drowning in a booze-fueled bender: drunk nearly every night but sober by morning and ambling across Santa Monica Boulevard for the day's session.

"When he got too drunk, he would become kind of an a—," recalls Doors guitarist Robby Krieger of Morrison during the "L.A. Woman" sessions, on the phone from his home in Benedict Canyon. "It got harder and harder to be close with him. He'd have his drinking buddies, and we were always trying to keep them from being together." Krieger's new memoir, "Set the Night on Fire: Living, Dying, and Playing Guitar With the Doors," doesn't pull any punches when it comes to Morrison's dark side, nor does it minimize his creative light.

"L.A. Woman" is the subject of a new reissue from Rhino Records. Called "L.A. Woman: 50th Anniversary Deluxe Edition," the physical set features a remaster of the album by original co-producer Bruce Botnick, two discs' worth of fascinating studio outtakes, extensive liner notes and a vinyl copy of the original stereo mix.

That Morrison, Krieger, drummer John Densmore and keyboardist Ray Manzarek managed to create "L.A. Woman" wasn't a foregone conclusion. After all, Morrison was the kind of guy who, after entering the Empire State Building in 1969 for a tour and boarding a crowded elevator, "swiped his hand across all the buttons, to the annoyance of all the other passengers who then had to wait as the elevator stopped at every single floor," Krieger writes in his memoir.

But the musicians were locking in at rehearsals and Morrison was writing, Krieger says. "Jim would stay in this crappy motel called the Alta Cienega, which was right across the street. That was good, because getting Jim to show up for recording sometimes wasn't easy. This time, because he was so close, he was usually the first one there."

By then, he'd become a certified rock star. Each of the Doors' earlier albums, including their early 1967 self-titled debut and their fall follow-up, "Strange Days," had gone platinum, though none had hit No. 1 until their third, "Waiting for the Sun," and its smash, "Hello, I Love You," in 1968.

Initially tentative during their early years at the Whisky A Go Go, by the time the Doors released "Morrison Hotel" in early 1970, Morrison and his bandmates had toured incessantly. Morrison's writhing, explosive performances made headlines, and were way wilder than those of pop-oriented L.A. peers the Byrds, Joni Mitchell or the Mamas and the Papas. (As he was becoming Iggy Pop, young fan James Osterberg drew inspiration from Morrison at a Doors concert.)

Morrison had been increasingly tanked onstage across the band's two dozen shows in 1970, where the Doors were playing their hits alongside blues classics including Junior Parker's "Mystery Train," Willie Dixon's "Back Door Man" and John Lee Hooker's "Crawling King Snake," which they'd end up recording for "L.A. Woman."

"Jim loved singing the blues, especially when he was inebriated," says Botnick on the phone from his studio in Ojai.

At the Doors' disastrous Dec. 12, 1970, tour stop in New Orleans — Morrison's final concert — the rest of the band bailed on Morrison midset due to his narcissistic between-song tirades; at one point he told a misogynistic joke about a blind man passing a fish market and rambled on to a bored, restless crowd. During a stop in Dallas the night before New Orleans, they'd debuted then-new song "Riders on the Storm" and it had sounded great. "We thought, 'Wow, we're going to be a cool rock jazz group,'" says Densmore. "Then the next night Jim was so drunk it was terrible. I hated the erosion."