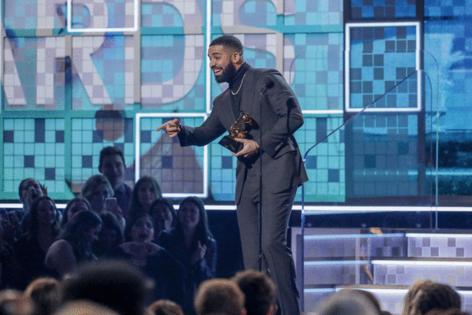 LOS ANGELES — After being nominated for two Grammy Awards, Drake appears to be saying thanks, but no thanks.

The musician has withdrawn his two nominations from final-round ballot voting ahead of the Jan. 31 ceremony, the Los Angeles Times confirmed Monday, and the Recording Academy honored the request.

It’s unclear why Drake made the request, and reps for the rapper and the Recording Academy did not immediately respond Monday to the L.A. Times’ requests for comment.

Drake’s irresistible album “Certified Lover Boy” had been nominated last month for rap album, and his single “Way 2 Sexy,” featuring Future and Young Thug, was up for rap performance. However, the album and its songs were not nominated in any of the marquee categories, such as record, album and song of the year.

Voting in the categories for rap album and rap performance will proceed with only four nominees, rather than giving the nomination to the sixth-most voted artist, Variety reported, citing ballots already being posted to Academy members.

The withdrawal is the latest twist in the artist’s contentious history with the venerable institution — though Drake probably wouldn’t characterize the Recording Academy that way.

The four-time Grammy winner declined to submit his “More Life” album for the 2018 Grammy Awards. He then called out the organization — and had his mike cut off — in 2019, when he won an award for his hit “God’s Plan” and quickly dismissed the value of the win.

“We play an opinion-based sport, not a factual-based sport,” he said at the time. “You already won if you have people singing your songs word for word, if they’re singing in your hometown. You’re already winning, you don’t need this right here.”

Last year, the 35-year-old superstar showed his support for fellow artist the Weeknd, whose “After Hours” album Drake expected to be a lock for either album or song of the year. But the Weeknd was ultimately shut out by voters and took to Twitter to call the Grammys “corrupt.”

“I think we should stop allowing ourselves to be shocked every year by the disconnect between impactful music and these awards and just accept that what once was the highest form of recognition may no longer matter to the artist that exist now and the ones that come after,” Drake said on Instagram stories back then. “It’s like a relative you keep expecting to fix up but they just won’t change their ways.”

At the time, criticism had mounted around “secret” voting committees which were believed to have reinforced institutional racism by discounting hip-hop and R&B artists in the more prestigious awards categories. Even when the Recording Academy announced sweeping changes to its voting process last spring, the Weeknd told Variety that he won’t submit his work in the foreseeable future.

Drake also suggested that the Grammys be replaced with “something new that we can build up over time and pass on to the generations to come.”

The Toronto-bred artist has kept a relatively low profile since last month’s fatal Astroworld music festival, where he made a guest appearance. Ten people died at the Houston event when a crowd surged during headliner Travis Scott’s set. Drake and Scott were among the many named in lawsuits stemming from the deadly incident.

Drake is scheduled to take the stage again Thursday during Ye’s “Free Larry Hoover” benefit concert at the L.A. Coliseum.

The gritty indie revenge thriller “Clean” is clearly a labor of love for Adrien Brody. Not only does he star, as a garbage man who goes by the moniker Clean, but he also produced the film, composed the score, ...Read More

Anita Baker is celebrating her birthday by sharing news of her return to the stage.

The Detroit R&B singer took to Twitter on Wednesday to announce a new Las Vegas engagement in May.