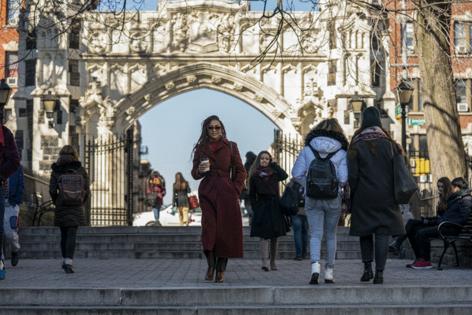 Enamored with shows like the Lena Dunham-starring “Girls” and “Broad City” on Comedy Central but unable to see herself anywhere in the predominantly white casts, “Girls Trip” writer Tracy Oliver created her own show about Black women living and loving and screwing up in New York.

But it wasn’t until after the success of the 2017 flick that Oliver even thought she could get her show made.

“Maybe I’m cynical in saying this but sometimes romance can be really disappointing,” Oliver told the Daily News.

“I think what we always have as a constant is our friends. That’s the one thing I have consistently in my life. The men come and go and the women are the ones who (stay). We pick each other up and we have honest conversations with each other.”

For the cast, their characters felt more realistic than what they were used to seeing on screen. The premise has been done before, most prominently on perennial favorite “Sex and the City,” which returns next week, but even as recently as “Run the World,” which premiered on Starz this summer. That doesn’t matter, the actresses say.

“When we feel like there’s only room for one or we can only herald one, it’s doing a disservice to the other lives that have yet to be represented. The Black experience and the experience of the woman in general cannot just be contained in one show, in four characters.”

Shandai, who plays the loudmouthed, over-the-top Angie, spoke of the dynamic, “layered” characters.

“These are women who were used as props or jokes in other shows, finally being able to tell their stories wholly and dynamically,” she told The News.