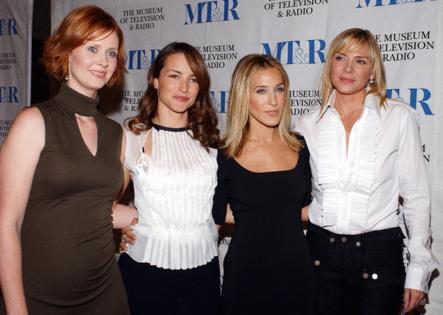 Kim Cattrall (Samantha) bowed out but the other women (Sarah Jessica Parker, Cynthia Nixon, Kristin Davis) will be part of the 10-episode series.

Nostalgia buffs will also get a kick out of Norman Lear’s third “Live in Front of a Studio Audience,” this time reenacting classic episodes of “Facts of Life” and “Diff’rent Strokes” on Tuesday on ABC. Among the actors involved include Jennifer Aniston (playing Blair), Kevin Hart (Arnold), Gabrielle Union (Tootie) and Kathryn Hahn (Jo).

The biggest Netflix film this week is “The Unforgivable,” starring Sandra Bullock as a woman trying to piece her life together after 20 years in prison. Others in the cast include Jon Bernthal, Vincent D’Onofrio and Richard Thomas.

On Wednesday, the ever busy Will Smith travels the world for a National Geographic special on Disney+, “Welcome to Earth,” as the actor faces some of his deepest fears while checking off bucket list experiences.

And Amazon Prime’s big movie release of the week is “Encounter” on Friday, a week after hitting theaters. It’s a tense family drama with the trappings of a body-snatchers story focused on a decorated Marine Malik Khan (Riz Ahmed) on a mission to protect his two young sons.

Shows that are ending their seasons include Fox’s “The Big Leap” Monday, CBS’ “CSI: Las Vegas” Wednesday and HBO’s “Succession” on Sunday. And Amazon Prime’s “The Expanse” Friday ends its series run after six seasons.

This covers Monday, Dec. 6, through Sunday Dec. 12. All times Eastern.