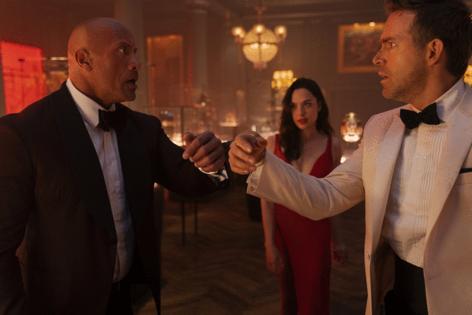 The streaming giant says the action-comedy, which stars Dwayne Johnson, Ryan Reynolds and Gal Gadot, has become the most watched movie in Netflix history and has logged hundreds of millions of "viewing hours," a metric that may make sense to Netflix but has little value outside of their own data analysis statistics. (For comparison's sake, how many "viewing hours" has, say, "Star Wars" logged, and is it in the centillions?)

So is "Red Notice" a hit, and what does it mean to be a hit at a time when traditional measurements for what constitutes success are being upended? For decades, the box office has told us how people are voting with their moviegoing dollars. But since the pandemic, theater attendance has been decimated and large segments of movie fans have proven slow to return to theaters. So the weekend numbers, while they still measure moviegoing traffic, don't mean what they once meant.

Do we go by streaming numbers? That would be fun, but Netflix and the other top platforms — Disney+, Amazon Prime, HBO Max, et al. — rarely cough up figures, and if they do, they're dripping in confusing, self-serving corporate speak and touting things like "viewing hours." And there are no across-the-board, apples-to-apples ways for the public to measure streaming traffic across services. Has "King Richard" done decently on HBO Max, or did its box office failure translate to a streaming disappointment, too? We don't know.

So we go by what we're told. "Red Notice" is a smash. Are people talking about "Red Notice?" Are they sharing gifs of it online, are they making memes about it? Is anyone even saying they enjoyed this generic heist film, which is the movie equivalent of a band taking a paycheck and playing a corporate holiday party? It certainly doesn't seem that way, but here we are.

The movie business was hit hard by COVID-19. The pandemic shuttered theaters, and a recent study from film research company the Quorom says that 49% of prepandemic moviegoers are not returning to theaters.

The lockdown got us used to being in our homes, watching content how we want, when we want, on our big TVs in our cozy living spaces. The hassle of going out, of being on a theater's time, of paying outrageous concession prices, heck, of putting on pants, has proven too much for many, and Hollywood will have a hard time luring those customers back and convincing them the theater is a better way.

Prior to the pandemic, Hollywood had already shifted to a superhero-forward business model. That left little room for adult fare, movies about real life with characters that resemble us, the non-superheroes. So audiences were already fragmenting, moving toward streaming series and away from movies. The box office successes — the Marvel movies, for example — were hits to a certain segment of the population, but adults weren't gathering at dinner parties and discussing the finer points of "Ant-Man and the Wasp."

And "Ant-Man and the Wasp" was a hit, a huge one, pulling in $216 million at the North American box office and $622 million worldwide. It was 2018's ninth highest-grossing film. People should have been talking about it. But were they? And are they now?

Maybe hits are more disposable today than they used to be, when the monoculture brought us together and gave us a central rallying point. Now we're all off on separate services, watching separate content, and the audience is so all over the place that there's no longer a middle. YouTuber MrBeast's "Squid Game"-themed video has racked up 141 million views in eight days. That certainly sounds like a hit. Shouldn't more people be talking about it? And are you even subscribed to MrBeast? (You should be, he might put you in one of his videos, and the guy is known for giving out very large sums of cash.)

Views, viewing hours, box office dollars, mainstream chatter: since we can't decide what makes a hit anymore, it's not surprising that we don't know what a hit looks like. Until one really comes along: "Squid Game" was a sensation, and captured people's attention and curiosity more than any film has this year, including "Shang-Chi and the Legend of the Ten Rings," the year's highest grossing movie, and including "Red Notice," and its 328.8 million (and counting) viewing hours.

The previous most-watched Netflix title was "Bird Box," which seemed to make more of a cultural dent — remember the blindfold memes? — but that was 2018, and even then audiences weren't as fractured as they are now.

So maybe "Red Notice" is a hit, since a hit today is whatever you say it is. But like the story of Cleopatra's missing egg — c'mon, it's the plot of "Red Notice," which you should already know, since it's such a big hit — things these days are not always what they seem.