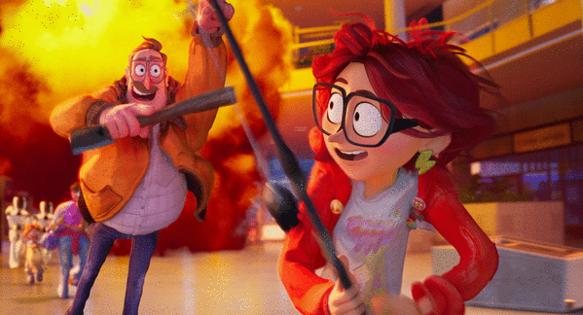 "The dad in the movie looks exactly like my dad. My dad owns that jacket," says "The Mitchells vs. the Machines" co-writer and co-director Michael Rianda of his animated film. "He's like" — takes on a deep dad voice — "That sounds suspiciously like Danny McBride [who plays the dad in the movie]. Mike, the guys at the Elks Club are talking. Did you have to make him look exactly like me?'

"So it really does come from a deeply personal place."

Yes, there are physically improbable chases and fights with robots and giant Furbys, including one wild ride in which the mom, voiced by Maya Rudolph, "murders about 1,000 robots." But "Mitchells" is about the family. Full stop.

They are a sloppy, messy clutch of imperfect people trying to reconnect before eldest daughter Katie (voiced by Abbi Jacobson) goes across the country to art school. There's dino-obsessed younger brother Aaron (Rianda) and amiable tongue-hanging pug Monchi, and countless identical robots led by the ultimate evil AI ( who better than Olivia Colman).

Katie rings true where so many animated movies' outsider-kid protagonists do not.

"It didn't work until we had Katie trying to connect with her dad: 'I made this video about you, don't you like it?' And him saying, 'Ahhh … well … maybe this isn't going to work out [meaning her career as an artist]. Maybe you should think of a backup plan.' As soon as we had the characters trying to reach out to each other instead of yelling, it really activated the family."

There's a reason the filmmakers had insight into Katie: They were her.

Katie is a combination of several people on the filmmaking team, says Rianda: "Me, because I went to art school and my dad is a very practical man who had a lot of questions. Jeff [Rowe, co-writer and co-director] brought his own stuff. Lindsey Olivares, the production designer, brought a ton from her life visually — like writing on the shoes. We felt like we got there when we showed it to someone in Korea who said, 'Oh, I drew on my pants like that.'"