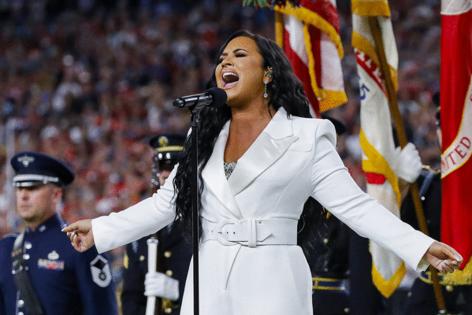 “I no longer support my ‘California sober’ ways,” the singer wrote in their Instagram Stories on Thursday, referencing their previous policy that allowed marijuana use and the occasional drink in a relatively substance-free lifestyle.

“Sober sober is the only way to be,” they continued.

The singer, 29, almost died back in the summer of 2018 after overdosing at home in the Hollywood Hills and being treated with Narcan, used to counteract opioids.

Lovato revealed in February that the overdose brought on three strokes and a heart attack, and said doctors guessed they had “five to 10 more minutes” to live when they got to the hospital. After a two-week stay there, Lovato entered an in-patient rehab facility.

The singer said in March that they struggle with tinnitus, can’t drive and can’t see a person’s mouth or nose when looking at them directly.

In that same interview, Lovato told Glamour that an all-or-nothing approach to sobriety in the wake of their OD wouldn’t work, because they were trying to recover from an eating disorder and tackling sobriety simultaneously. The singer left the door open to having a drink or smoking marijuana.

“When I ignore and deny myself of my truth, I get angry and I overflow, and I make choices that are really bad for me,” Lovato said. “If I look in the mirror and present the mirror with something I’m not, it will shatter.”

No further detail was available Friday about Lovato’s newest comment.