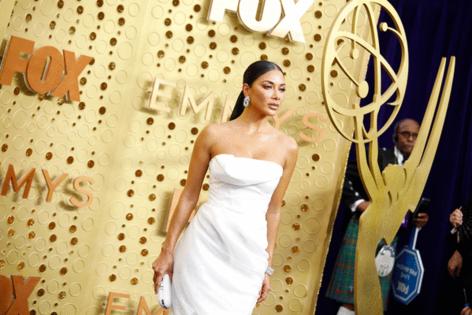 It's only three words, but it sends her into a tailspin of disbelief and exuberance — a sentiment Scherzinger expresses by sliding on furniture, scatting from atop a piano bench and singing while upside-down. The ambitious musical dance number, featured in Thursday's telecast, is both a tribute to a late Broadway legend and a milestone for the actress succeeding her.

NBC's live musical special retold the beloved story of a plucky Depression-era orphan (Celina Smith) who is adopted by a billionaire. It made a special effort to include "We Got Annie," a song written for the 1982 film that remains omitted from stage versions of the show. The movie cast Broadway legend Ann Reinking as Warbucks' personal assistant Grace, and her mansion-wide celebration of Annie's impending arrival has since become an iconic movie-musical moment.

"She had a wonderful sense of style and sophistication," says "Annie Live!" choreographer Sergio Trujillo of Reinking, who was a dancer in the 1999 stage tribute "Fosse," which Reinking co-conceived and co-directed. "This number is by no means a replica of the movie, but she was in my heart as I was creating it. I wanted to pay homage to her with movements that are beautiful and elegant."

Scherzinger, who studied theater in college and headlined the West End revival of "Cats," knew she had big shoes to fill. "No one's ever really done this song since Ann," she says of Reinking, who died last year. "I really want to make her proud. So I told Sergio, 'I want this to be something really special. I want to push the limit and really be challenged.'"

The jazz number sees Scherzinger and more than a dozen performers dancing amid floral arches, ladders and couches. Trujillo reconfigured one of her many lifts into a slow-motion somersault, in which she belts out a note while suspended upside-down. And since Scherzinger considers herself more of a singer than a dancer, she worked with musical director Stephen Oremus to add a scat section.

It's a complex sequence that requires a triple threat like Scherzinger to perform full-out for three-and-a-half minutes, and then calm her breath for a dialogue scene with Warbucks immediately afterward. She was often unsure she could get through it at all: Scherzinger was recovering from COVID-19 and a torn hamstring just before rehearsals for "Annie" began.

"I'm not gonna lie, I've worked really hard to try to develop that technique and stamina again and get my body ready for this pace and style of dance," a tearful Scherzinger says. "Finally being able to do it feels like I've just come home. This is what I love to do, more than anything. This kind of storytelling is how I communicate and what I care so deeply for."

This reimagining of "We Got Annie" is a rare center-stage moment for Grace, a character usually sidelined to the show's ensemble numbers. (It also mercifully removes stereotypical riffs on South and East Asian traditions in the film version.) In the NBC special — also starring Harry Connick Jr., Taraji P. Henson, Tituss Burgess and Megan Hilty — eight cameras take turns swirling around Scherzinger, always moving as much as the dancers do.

"We're trying to just capture her joy as a character in this moment, as well as her joie de vivre," says television director Alex Rudzinski. "There's a real intimacy and energy to the performance that almost feels magical for the viewer at home [versus] if you were to just capture [it] from a static position."

Scherzinger hopes that "We Got Annie" adds a depth to Grace that rarely gets center stage. "She's had a dream for a family that she's long sacrificed for her career," she says. "This moment is that possibility of realizing that dream, even if it's not in the way she may have thought. I feel so blessed to be able to play that empathy and compassion, as well as that strength and power, and I hope it will inspire others at home as well."