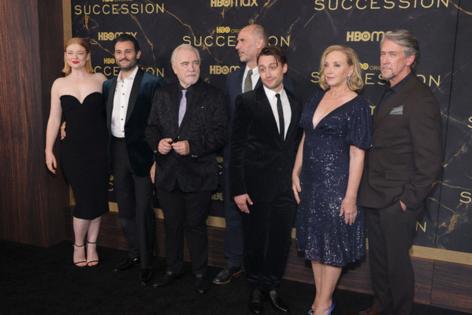 Logan Roy, the patriarch of the HBO series "Succession," is every inch an irascible king. Cut from the same cloth as Rupert Murdoch, he lords over his right-wing media kingdom with a dyspeptic ferocity that routinely erupts in a two-word kiss-off that can't be printed in a family newspaper.

Ruthless in battle, he reserves his cruelest weapon, his bludgeoning wit, for those in his inner sanctum. With a single withering remark, he can cut the legs out from under one of his adult children grown too big for their britches.

If Logan at times resembles a King Lear transported to 21st century New York, it's not simply because the character is played by the inestimable Brian Cox, an actor who successfully tackled the role of Lear in a Royal National Theatre production that toured the world and wrote a book, "The Lear Diaries," on the experience.

In the third season of "Succession," the Shakespearean parallels have grown more pronounced. Logan's empire is under siege after Kendall (Jeremy Strong), the self-appointed filial successor to the throne, refused to be the fall guy for the company's misdeeds.

To save his own skin and revenge himself on Logan, Kendall has turned whistleblower. He's cooperating with the Justice Department while plotting to take control of Waystar Royco with or without his siblings, who are as reluctant to throw their lot in with their erratic brother as they are nervous to cross their formidable father.

In the past, Logan's Lear-like connection wasn't easy to disentangle from other Shakespearean dragon leaders. "I put Logan on a level of a Titus Andronicus, or even a Julius Caesar and certainly a King Lear," Cox told the entertainment awards website Gold Derby in 2019.

Noted Shakespeare scholar Grace Ioppolo took issue on Twitter with my comparison between Logan and Lear. She rightly noted that Logan "doesn't have Lear's majesty" and made the case instead for Richard III: "Logan's reshuffling of family allegiances reminded me of Richard III's reshuffling of his courtiers."

But brutal as Logan may be, he's not a butcher. An early impression that Cox records in "The Lear Diaries" holds true for how he approaches his character on "Succession": "I do think there are a lot of laughs in 'Lear'; it's a play with humor; and Lear's a bit of a curmudgeon, a bit of a silly old boy."

Like Lear, Cox's Logan seems to have "ever but slenderly known himself," as Regan remarks to Goneril about their rash father. His tunnel vision is both an accouterment of power and a tragicomic flaw. Logan's imperious reaction to slights, his need to be worshiped by his children and the emotional value he places on loyalty suggest a paternal tenderness buried under protective layers of narcissism.