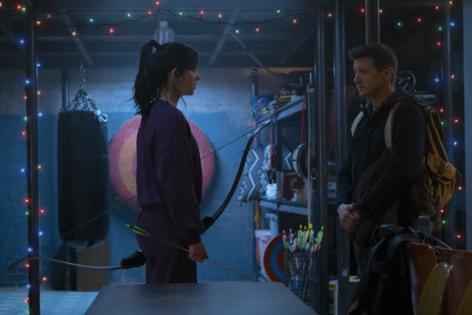 Maya Lopez has a grudge to settle with Ronin.

"Hawkeye" Episode 3, aptly titled "Echoes," kicks off with a trip to the past, showing how a young Maya (Darnell Besaw) navigates the hearing world. Besides being the apple of her father's eye, this Maya excels at her schoolwork (despite her teacher's worry) and even takes out a kid much larger than her during a martial arts class.

The story then jumps a few years forward — where a now grown-up Maya (Alaqua Cox) is shown to have developed into an even more formidable fighter — to reveal exactly why she's after the vigilante ninja. Sometime during the blip years, when half the world had been snapped out of existence by Thanos, Maya watched Ronin stab her father amid a scuffle with the Tracksuits. During his final moments, Maya's father reaches to caress her face, leaving a bloody handprint on her cheek before dying in her presence.

It's clear that Maya is ready to avenge her father now that Ronin appears to be back, which is bad news for Clint Barton (Jeremy Renner) and Kate Bishop (Hailee Steinfeld).

One of the episode's biggest reveals, however, is that there is someone even higher up on the Tracksuit Mafia's command chain than Maya.

"The guy at the top, he'll do anything to grow the operation," Clint tells Kate during the episode. "Someone you don't want to mess with."

All signs point to this mysterious figure being an uncle Maya's father mentions to her in the earlier flashback. But audiences are only given a glimpse of his black suit and large stature during that scene, as this uncle reaches to pinch Maya's cheeks.

While this mysterious uncle's identity has yet to be revealed, Maya's comic book backstory offers big clues on who this villain may be.

What is Maya's comic book backstory?

Maya's Marvel Cinematic Universe origin story is pretty similar to that of her comic book counterpart.