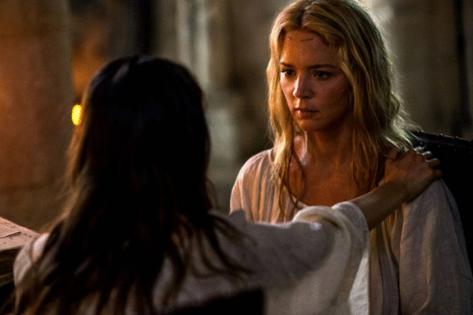 At the ripe age of 83, Dutch boundary pusher Paul Verhoeven is still pushing boundaries, even if at this point they're only of good taste.

The "RoboCop" and "Starship Troopers" filmmaker's first film since 2016's rape-themed character study "Elle" is a 17th century tale of sex and religion that features graphic nudity, gruesome violence and imagery designed to rattle, well, just about everybody. If you don't see something on screen that makes you squirm, just wait a few minutes.

"Benedetta" tells the true story of Benedetta Carlini, a nun who rocks her Italian convent when it is found she's in a lesbian affair with another nun. Verhoeven isn't so much out for historical accuracy as he is for tawdry titillation, and those aspects land better than his attempts to shake the establishment or shed light on hypocrisy and moral outrage through the ages.

Virginie Efira plays Benedetta, who even as a child claimed she was in direct contact with God. She enters a convent — Verhoeven, who co-wrote the screenplay with "Elle's" David Birke, paints the process as a moneymaking racket — and grows up taught to fear both mental intelligence and her own skin. "You worst enemy is your body," she's told by the convent's head nun, played by Charlotte Rampling. "You should never feel at home in it."

So she doesn't, which is the opposite of Bartolomea (Daphne Patakia), who joins the convent as a means of escaping her sexually abusive father and brothers. She's free with her body where Benedetta hides hers, but soon they're exploring each other in ways that recall late night Cinemax movies, although those movies shied away from what Verhoeven has his ladies do here with a whittled down statue of the Virgin Mary.

Offended yet? Verhoeven hopes so. Benedetta rises within the convent when it becomes clear that Jesus is speaking through her, or maybe she's cutting up her own hands to fake wounds that resemble stigmata. Verhoeven has it both ways with the character and her connection to divinity, because religion isn't his main concern here. It's sex, and "Benedetta" features plenty of it, like if his "Showgirls" was set in 1600s Italy. (Sadly, neither Kyle MacLachlan nor a swimming pool waterfall show up on screen.)

"Benedetta" does feature a committed performance from Efira, even if she resembles a Real Housewife of 17th Century Tuscany more than she does a period-appropriate figure. Verhoeven is tackling themes of fear and lies, good and evil, God and the devil, and if he tosses in a beheading here or a lactating breast there, that's just Paul being Paul. At least he hasn't gone soft.

(In French with English subtitles)

Where to watch: In theaters and On Demand Friday