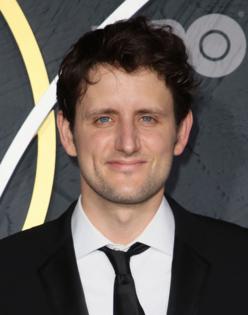 Known for his portrayals of Gabe on “The Office” and Jared on “Silicon Valley,” Woods is embracing a new passion behind the camera as co-writer and director of shorts featuring big-name actors like Will Ferrell and Michael Pena.

His latest, “Bud,” stars Pena as a father who takes his daughter out to dinner for her 7th birthday and is quickly ambushed by angry diners offended by something he did off-camera.

“When I see public shaming, automatically my mind starts to do sort of moral algebra,” Woods told the Daily News. “‘OK, what did they do? Does that warrant this? Is this not a sufficient reaction? Should there be less?’ I get sucked into the equation of what someone deserves or doesn’t deserve.”

“Part of why I wanted to tell this story is I thought it would be interesting to see one of those experiences from the perspective of someone who doesn’t even have the information to engage with the ideological ramifications, who can’t make a moral judgment, who’s just having an experience of seeing a loved one caught in the jaws of public outrage,” he said.

The 10-minute project debuted Wednesday on Omeleto, a platform for short films that boasts more than 3 million YouTube subscribers and more than 1.5 million Facebook followers.

“Bud” is the second short created by Woods, who wrote both projects with Brandon Gardner. The first — “David,” starring Ferrell as a therapist struggling with his own home life — was selected for the Toronto International Film Festival and the Cannes Film Festival in 2020.

Woods, 37, enjoys the freedom of being able to write, direct, produce and edit his shorts, and values working with filmmakers and actors who aren’t concerned about turning a profit at the box office.

“The only people who show up to do a short film are people with big hearts and who care,” Woods said. “The self-selection’s incredible. You can look around a big movie set and there could be people who are just sort of punching the clock for their retirement, and that’s fine. But on a short film set, the only people who are there ... are there because they love the story, and they love each other. That, to me, is so thrilling.”

Woods has appeared in dozens of film and TV roles since he became a professional actor nearly two decades ago, and says he was deep into his career when he realized his interest in directing.

But his years of experience helped prepare him for work behind the scenes.

“There are a few ways in which it was helpful,” Woods said. “One is sets, to me, are like the greatest film schools in that people are so generous with their expertise. ... You can get these very in-the-weeds questions, and they will tell you. You’re around all these experts who will give you the technical know-how.”

Woods, who is from Trenton, New Jersey, also has his first feature-length project in the works, and while he’s keeping its premise private for now, he says he hopes to shoot it next year.

He credited his time on TV and film sets with introducing him to people he’d like to work with, including Ferrell and Pena.

“It’s like having a crush,” Woods explained. “You see an actor who you love and you’re like ... ‘I want to work with them. I want to make something for them.’ It really feels crushy in a way, and having spent enough time at the kind of Hollywood dance, I’ve been able to identify the partners I want to take a turn around the floor with.”