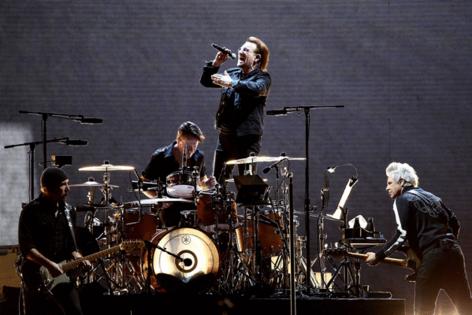 "Making music has been a source of great frustration for me as well as great joy," he says over a video call. "I didn't have musical training as a kid. So I have to depend on my three bandmates and others to get the melodies I hear in my head, or the ideas, across. And therein lies great frustration, that you depend on others — and the great joy, that you depend on others — and they happen to be your best mates."

When referred to as "an actual musician," the famed frontman of U2 grins in this cozy room in his Dublin abode and says, "Well, that might be an exaggeration. That's why I'm involved with this: I'm obsessed with what it takes to become one. But I know musicians."

In "Sing 2," Garth Jennings' sequel to his 2016 music-mad-animals hit, Bono voices Clay Calloway, a storied superstar singer-songwriter (portrayed as a great, silver-maned lion) who has long been a recluse since the death of his wife. Much of the film is about the search for Calloway and how the "Sing" gang might persuade him to embrace his gift again. It's a quest almost as improbable as Jennings' hopes to even land Bono for the film.

But the two connected right away. "I found myself on a call with [Jennings], walking in the hills there in Los Angeles," the singer says. "I got lost talking to him, every which way — I didn't know where I was. He got me talking about singing, the nature of singing, what it was to be a singer, where does singing come from. And of course, being Irish, these are all the right questions!"

For his part, the British Jennings says he thought the pitch was a long shot. The "Sing 2" team, he says, "knew we needed a rock legend — not only a personality, but the music that would come with them. Bono was the first thought. He would be amazing and those songs would fit so well with that kind of a story. But he's not going to say 'Yes.' I mean, this is a lion.

"But he got it right away. He was almost selling it back to me when we had this long conversation: 'I get what this character is; he has a big, passionate feeling toward music and what it can do for people.' That story is really about healing. And U2's concerts, they can be like a religious experience."

Bono says, "The lion had lost his roar. We ended up talking about what would cease you from singing. We ended up talking about grief. Grief can open up creativity or close it up. This is a subject I sadly know a little bit about. I'm talking to this dude about a children's film; are we really going there about grief? But that's the whole point of these animations, that you use these fun characters to play with deeper, darker themes.

"Kids and their parents watch them again and again. Much more than other movies that win the Oscars, these become part of our consciousness. They help shape the way we see things.

"Some of the music when I was growing up that we were told was superficial and not to be taken seriously turned out to be some of the most important music in my life. At the time of punk rock, we weren't owning up to disco," he says with a smile. "But disco is such a light touch — just an hour ago, we were listening to Sister Sledge, 'Lost in Music.' Comedy, to me, is a light touch."

A number of entertainment figures and fashion luminaries have taken to social media to memorialize style titan André Leon Talley, who died Tuesday at 73 in New York.