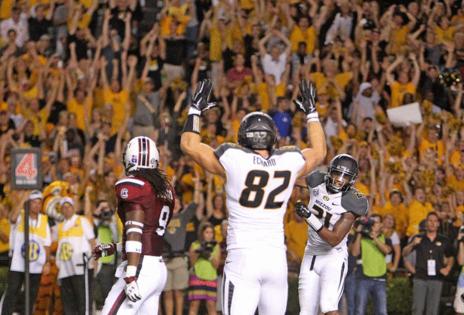 ABC has announced that Clayton Echard, who lives with his family in Lake Saint Louis and was eliminated from the romance competition "The Bachelorette" just last week, will be the featured bachelor on next season's "The Bachelor," which begins Jan. 3.

Echard, 28, grew up in Eureka, where he played football at Eureka High School. Though he was not initially offered a scholarship, he earned a spot on the team at the University of Missouri. After college, he was signed by the Seattle Seahawks, but was cut from the team before the season started. Film crews were spotted in Eureka this fall, causing some to speculate that they were filming "The Bachelor."

Now working as a medical equipment sales representative, he was one of the eligible contestants hoping to win the hand of teacher Michelle Young in the current season of "The Bachelorette," which began in October.

Young did not give him the all-important staying-in-the-competition rose last week, saying that even though he "completely checked every single box of all the qualities I'm looking for in somebody," she turned him down because she was not ready to meet his family, a requirement of the next episode. Her students, however, fell in love with Echard, writing him notes that told him they knew he'd find love and be a great dad.

Both "The Bachelor" and "The Bachelorette" are structured to end with a proposal of marriage, though sometimes no proposal is made. In the 17 completed seasons of "The Bachelorette," three of the couples have married — though one couple later divorced — and another is engaged.

In the 25 seasons of "The Bachelor," one couple married and another couple is still together after publicly breaking up for a while. Two of the bachelors went on to have relationships with women from the show they did not pick, and one of those couples is now married.