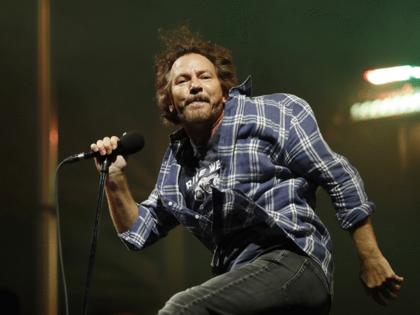 Their six-city, eight-concert tour is timed to promote Vedder's upcoming new solo album, "Earthling," which is due out Feb. 11 on Seattle Surf/Republic Records.

Vedder first performed with The Earthlings on Sept. 24 at the opening of his annual Ohana Festival in Dana Point, California. The three-day festival was headlined for two consecutive weekends by Pearl Jam, whose drummer, Matt Cameron, is a San Diego native.

Pearl Jam, meanwhile, plans a 2022 tour that will begin in May and replaces its 2020 North American tour, which was canceled in its entirety by the COVID-19 pandemic.

Fans seeking to attend any of the February concerts by The Earthlings will have to act quick to try to secure tickets.

"There will be no general public sale," according to a statement released Wednesday by Live Nation, the tour's promoter.

A ticket presale for Pearl Jam Ten Club members who have been active in the club as of Tuesday will be held through Ticketmaster's Eddie Vedder Request page. The Ten Club presale registration is open now through 5 p.m. PT Sunday.

All other tickets will be available only through the Ticketmaster Verified Fan Registration, which was created to thwart scalping. Verified Fan ticket registration is open now through 5 p.m. Sunday at verifiedfan.ticketmaster.com/eddievedder.