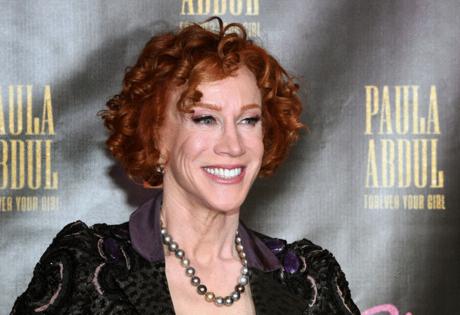 The firebrand comic shared the good news during a Tuesday appearance on "Jimmy Kimmel Live!," explaining what she's been up to since being "canceled" and trying out plenty of new material on the show.

The formerly embattled comedian said in August that she had been diagnosed with stage 1 lung cancer and had to have half of her lung removed. The August lung surgery went well and she lived to tell about it Tuesday.

The jubilant star leaped onto the "Kimmel" stage and started dancing when she arrived — then immediately launched into an explanation about her altered voice.

"I had surgery, you're not going to believe this. So, I've never smoked, but I got lung cancer. In August, I had half of my left lung removed. I'm not even kidding," she told Kimmel.

Griffin said that her voice will heal, but in the meantime, she's enjoying the change.

"I'm a good two octaves higher, I think," she said, "It might be. It's higher than Mariah Carey, I know that."

Griffin said that her tumor had been there for 10 years, but the doctors successfully removed it. Days after her August surgery, Griffin said in an Instagram video that her voice was still really hoarse, half-whispering in a gruff, barely recognizable voice.

She quipped that her new drag name should be "Diva Half a Lungoria" and reveled in being newly discovered by young gay fans who weren't privy to her infamous 2017 photo shoot controversy.

She mused about "very slowly getting uncanceled" following the major hit her career took when she participated in a grisly pictorial criticizing then-President Donald Trump.

Kimmel, who introduced Griffin as "a remarkably resilient human being," said he was one of the few who rejected her career demise and dubbed her "officially uncanceled."

Griffin also felt compelled to explain the designer tracksuit she wore for the TV spot, complete with a Gucci belt bag and sneakers, telling a suited Kimmel that she's "curvy" now after gaining 20 pounds during the COVID-19 pandemic and doesn't fit into her size-2 dresses anymore.

"I'm chubby or roly-poly, but I look rich," she joked, adding that she was inspired by rewatching "The Sopranos" and "manifested that" aesthetic.