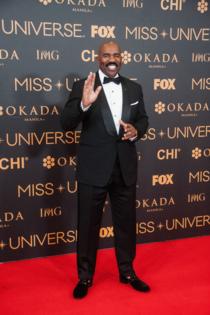 Steve Harvey is headed to court again — but not as a defendant.

The Emmy Award-winning funnyman will be the one banging the gavel as he presides over the courtroom in the upcoming show “Judge Steve Harvey.”

The unscripted legal comedy series will premiere Jan. 4 at 8 p.m. ET on ABC.

“It’s always good to come to court when you can’t lose,” Harvey says in the teaser for the one hour show, which he will co-produce with Walt Disney Television.“

”I’m extremely excited for the opportunity to continue my fruitful partnership with ABC and collaborate with them on my next venture,” the former daytime talk show host said with the show’s announcement. “Viewers tuning into Judge Steve Harvey will watch as I tackle tough and, at times, entertaining issues while also providing much-needed advice and good old-fashioned common sense to the litigants in my court.”

“The Original Kings of Comedy” star — who also hosts “Celebrity Family Feud,” which airs on ABC and the hit syndicated daytime show” Family Feud” — will stand out with his latest television foray; daytime television is typically littered with other courtroom series. “Judge Steve Harvey” is the only one set to air on broadcast network prime-time.

“Steve Harvey is completely in his element in this show, and that’s why we love working with him, and fans love watching him,” Walt Disney Television executive vice president Rob Mills said. “His wit and charm lend itself perfectly for this hilarious courtroom series that features some of the most outrageous cases ever seen on television.”