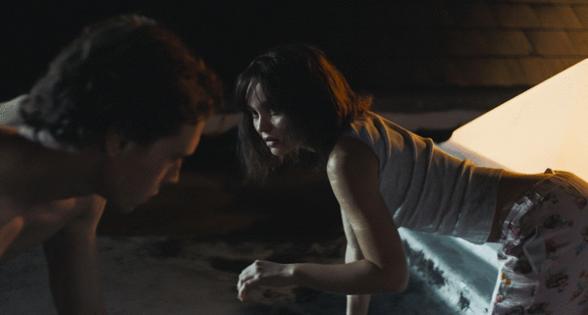 In "Wolf," George MacKay ("1917") plays a character who believes he is a wolf. And it's clear that MacKay has done the homework: he has adopted the mannerisms of a wolf, he crawls and moves his entire body like a wolf, he howls like a wolf. If he came out and said he watched 140 hours of wolf footage and lived with actual wolves to prepare for the role, it wouldn't be surprising. His gives a mesmerizing, fully committed performance in a bizarrely misguided movie.

It's misguided because writer-director Nathalie Biancheri doesn't do an effective job of creating a realistic, believable environment for her characters. Unintentional laughs abound. If there's a deeper metaphor to be mined, another layer of meaning to her work, it's never clear what it is and the message is not properly conveyed. It's a strange experiment with no clear payoff.

MacKay is Jacob, who is seen crawling around a wooded landscape, naked, as the movie opens. Soon after his parents are committing him to a treatment center that specializes in patients with species identity disorder — in short, people who think they're animals. Among his fellow patients are a person who believes he's a dog, one who thinks she's a parrot, one who swears he's a squirrel.

Lily-Rose Depp plays Wildcat, a lifer at the center who believes she's, well, it's in her name. She takes a liking to Jacob and they sniff each other out, at first figuratively and then literally. They're both trying to evade the scornful wrath of the Zookeeper, the forceful and often sadistic head trainer at the facility, who is played with seething menace by Paddy Considine. When Jacob lashes out in wolf mode, the Zookeeper has him locked up in chains and caged.

"Wolf" toes a line between serious and silly and more often than not falls flat into the latter. It's a matter of tone, and while Biancheri surely doesn't mean to mock her subjects, their portrayals, often stilted, are all over the place. By the time the group is doing aerobics to a Spanish version of Laura Branigan's "Gloria" it would be easy to say the film has gone off the rails, but that implies it was ever on them to begin with. True to its name, "Wolf" is a howler.