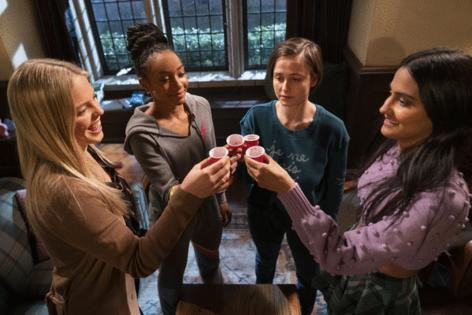 The frothy HBO Max comedy series “The Sex Lives of College Girls,” created by Mindy Kaling and Justin Noble, centers on the exploits of four freshman roommates away from home for the first time. A few episodes in, their resident adviser has convened a dorm-wide meeting ahead of parents weekend and this is when I knew I had fallen for the show and its almost giddily sardonic sense of humor. One of the students makes a suggestion: “Before our families arrive, I think we should all quickly share any lies we’ve told them that we’d like each other to corroborate.”

Bela, the boy-crazy aspiring comedy writer (a wonderfully goofy Amrit Kaur): “My parents think I’m a neuroscience major, which I’m clearly not. Also, they think I wash my sheets.”

Leighton, the snobby rich girl with a secret (a comically icy Renee Rapp): “I told my dad all of our textbooks come from Net-a-Porter and that is why he’s getting charges.”

Kimberly, the intense but good-natured small-town yokel (Pauline Chalamet, bringing both the cringe and the realness): “My parents think I go to church every weekend. I made up a priest. His name is Father Steve and he’s guiding me on my faith journey.”

Whitney, the varsity-level athlete whose mother is a progressive U.S. senator (Alyah Chanelle Scott, wonderfully down-to-earth but also conflicted): “I told my mom I joined the Young Republicans. I didn’t. I’m just trying to (mess) with her. But please, corroborate.”

The cozy, leafy New England campus of the fictional, Ivy League-ish Essex College (which may or may not be based on Kaling’s own alma mater of Dartmouth) is the center of their social life and, yes, sex — or the quest for it — is part that. But there’s so much more going on. The four-friend template (which notably also undergirds “Sex and the City” and “Girls”) proves to be a hardy one, and it’s executed here with an appealing self-awareness about the flush of new love (or lust) and the way it can become an all-consuming distraction from schoolwork, or the unspoken pressure to stay in the closet if your family happens to travel in certain right-leaning country club circles. Other storylines could use a little more time and curiosity. Whitney’s days are centered around soccer practice and a dubious affair with her coach, but eventually she does also seek out a community of fellow Black students at this PWI. Then there’s Leighton and her belated realization that she’s apparently a math whiz. Is this something you wouldn’t know about yourself by the time you got to college? Either way, it’s a detail that’s abandoned almost as soon as it’s introduced. I did laugh, though, when her perfectly sexist math professor invites her to join an exclusive study group and proudly informs her: “I want to increase the number of women in my seminar,” he tells her. “To one.”

Mistakes and blinkered missteps are enthusiastically played out alongside more successful attempts at college life and it captures that sometimes precarious euphoria of finally making your way without parental supervision, hyped up on potential and hormones. “I say the four of us go out, get tanked and, who knows, maybe we’ll end up meeting a guy who doesn’t treat us like garbage,” one of them says as they sit around, semi-down in the dumps. “Or not. It doesn’t matter, at least we’ll be having fun.”

As the chatterbox Indian American girl hoping to land a spot writing for the college’s humor magazine, Bela might as well be a stand-in for Kaling herself, the latter of whom found fame in front of the camera on “The Office” but has become a prolific producer behind the scenes as well, including the Netflix series “Never Have I Ever,” on which co-creator Noble has also worked.

I’m probably most impressed with the way money and class is explored through Kimberly’s work-study status, which stands in contrast to her roommates. Chalamet, who is the older sister of “Dune” star Timothee Chalamet, plays the character’s blundering, puppyish vulnerability of it so well. In a sea of well-off kids who went to prep school, Kimberly is forever aware of the gap that exists, which is financial but also something more elusive; she and her mother wildly overdress for dinner at a nice restaurant, unable to really pinpoint the nuance between upscale and formal.